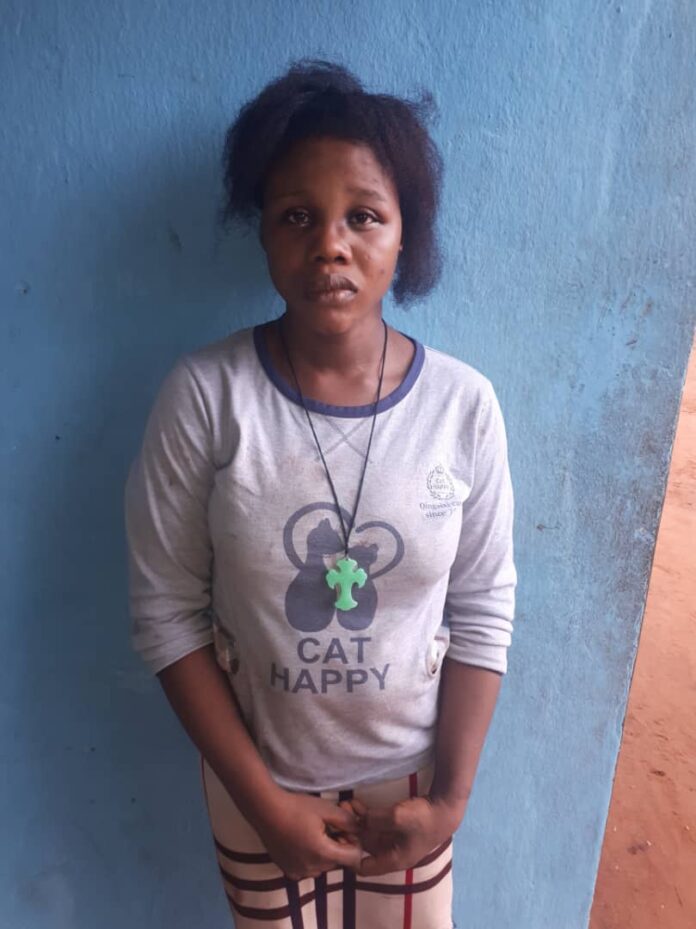 On Saturday 29/6/2019 at about 8:am,Police detectives attached to 33 Police Station Onitsha arrested one Makoduchukwu Ndubisi ‘f’ aged 20 years of NO. 16 Donking Street Nsugbe in Anambra East LGA of Anambra State.
Suspect allegedly had a scuffle with her husband one John Bosko Ngu ‘m’ aged 35 years of the same address and stabbed him on his chest with a sharp knife.

Scene was visited by Police detectives and victim rushed to Boromeo hospital Onitsha for medical attention but was certified dead on arrival by the Medical Doctor.

Meanwhile, corpse was deposited at the hospital mortuary for autopsy.exhibit recovered and case is under investigation to ascertain circumstances surrounding the incident.

Similarlt, on the 28/6/2019 at about 8:40pm,puff adder operatives in conjunction with Patrol team attached to B’ division Awka while on stop and search duties along ifite road Awka intercepted a one chance robbery syndicate operating in a
Shuttle bus with registration number FGG 38 ZX and arrested the following suspects.

During search on their persons and the vehicle, the following exhibits were recovered therefrom viz;

The syndicate specialized in robbing innocent students of their phones, snatching of cars & other valuables.Already some of the victims have been contacted through their phones and are trooping to the station to reveal circumstances surrounding their predicaments.

Case under investigation after which suspects would be charged to Court for prosecution.

2.2 On the 27/6/2019 at about 3:30pm, Puff Adder operatives in collaboration with the Command Special Anti Robbery Squad (SARS) trailed and arrested along Nteje/Otuocha road, one Emeka Onuku ‘m’ aged 20 years.

Suspect and his accomplices now at large robbed at gunpoint a Toyota Corolla car from one Obiorah Ifeanyi ‘m’ of No 104 Authur Eze street Awka on the same date at about 06:am.

Exhibits recovered in his possession include the robbed Toyota Corolla Car.Case under investigation and effort is ongoing to apprehend other fleeing accomplices in order to bring them to Justice.

Suspect who is also a member of vickings confraternity secret cult went to Blessed Lodge at Chukwuemeka Odumegwu Ojukwu University off campus ULI brandishing a locally made pistol loaded with a live cartridge but was arrested while trying to rob a student at the hostel.

Meanwhile, On the 23/6/2019 at about 3:pm one Chris Okafor ‘m’ of Agbani village ifite reported at Ozubulu Police Station that a female facebook friend lured him to Ihembosi and that upon arrival at about 1:00pm, the supposed friend directed a bike man who picked and took him to the bush where he was robbed by five boys including the motorcyclist of his money cash sum of Seven thousand Naira (#7000) his handset and other valuables after beating him with a stick.

Following the report, Police detectives attached to Ozubu Division in conjunction with vigilante group cordoned off the Area and arrested the following suspects,

All the suspects have confessed and the Complainant handset was recovered in their possession as exhibit.

Case under investigation and effort is ongoing to apprehend other fleeing accomplices in order to bring them to Justice.

Also, on the 27/6/2019 at about 5:30pm,there was a fatal motor accident at upper iweka Chisco Park by service lane Onitsha involving a Toyota Hiace Bus with REG. No.ABN.425YN driven by one Ezenwata Onyibor ‘m’.

The vehicle failed brake and the driver Lost control of his vehicle and suddenly knocked down one Ulochukwu Ukwuibe ‘F’ aged 40years of No 24 Izuora Street Okpoko.

Scene was visited by MTD Personnels attached to fegge Police Station Onitsha and the victim who sustained serious injuries was rushed to Toronto hospital for medical treatment but was later confirmed dead by a medical doctor. Corpse deposited at the hospital mortuary for autopsy.

Suspect was arrested and Case is under investigation.

On the 29/06/2019 at about 10:30am,there was a fire incident at a residential quarters behind MACDONS Amuda village Awka in Awka South LGA of Anambra State.

2. Police Patrol team attached to Central Police Station Awka visited the scene and cordoned off the Area to prevent looters from taking advantage of the situation to loot and the fire was put off by local volunteers in the Area.

3. However, one Mrs Okwuogu Veronica Chinwe ‘f’ aged about 66 years was trapped in the inferno and sustained various degrees of burns,she was rushed to Regina ceili hospital for treatment but was certified dead on arrival by the Medical Doctor.Corpse deposited at the hospital morgue for autopsy.

4. Meanwhile, cause of the fire incident is yet unknown and investigation is ongoing to ascertain circumstances surrounding the incident.