This feat in increasing revenue collection is first of its kind in the history of the command.

It is also as a result of the strategic plans aimed at enhancing the revenue collecting capacity in Onne Port. 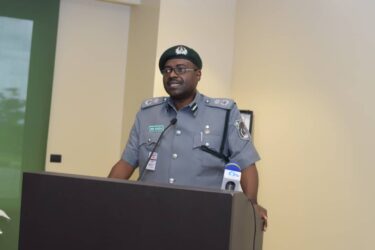 Comptroller Galadima is also vigorously pursuing the Comptroller-General of Customs zero tolerance for duty evasion, smuggling and other infractions like under declaration and so on.

He has been reviving proficiency in the area with regards to identifying and blocking all possible avenues of revenue leakages; enhancing capacity building in areas of modern Customs Operations; reinforcing the commitment of Officers and men in the discharge of their statutory responsibilities and assuring to bring to book any erring officer found compromising.

Saidu ensures seizures were successfully accomplished as a result of the renewed determination of the Comptroller-General of Customs Col. Hameed Ibrahim Ali (Rtd.) to rid the country of all forms of illegal importation.

He stated that there will be continuous sensitization for stakeholders on the need to be compliant with extant laws governing Customs activities.

Seizures made within the period are:

5. Forty-one (41) x 20ft containers comprising of one hundred and eighty-one bundles and ten thousand, eight hundred (10,800) packs of corrugated aluminium roofing tiles/sheets and its accessories with DPV of ₦561,753,188.00;

Nonetheless, the Area Controller placed a marching order to ensure that all importers/and their agents are compelled to comply with the extant laws on international trade, reiterated the Service zero tolerance for false declaration of goods or other deliberate infractions; and assured the readiness of the Command to facilitate trade in line with global best practices to all honest and compliant importers/agents.

CAN Condemns IPOB over Killing of Arewa Woman, Criminalities in the name of Biafra