In yet another successful covert operation, the combined troops of 26 Task Force Brigade, 21 Special Armoured Brigade and elements of Civilian Joint Task Force (CJTF), while acting on a piece of intelligence, conducted a sting operation against some Boko Haram criminals hibernating around Pulka general area of Gwoza LGA, Borno State on 20th October 2019.

The operation led to the arrest of 16 active Boko Haram members.

Preliminary investigation reveals that some of the arrested suspects participated in the heinous attack on Pulka and Gwoza including the barbaric execution of some Nigeria Police personnel sometime ago.

It is heart-warming to mention that 2 of the arrested Boko Haram criminals have been on the Nigerian Army most wanted Boko Haram list earlier published on Serials 41 and 90. 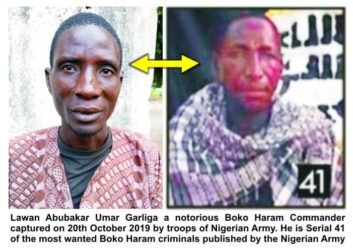 Following the massive success recorded by the troops during the sting operation, the Chief of Army Staff, Lieutenant General Tukur Yusufu Buratai has commended the Theatre Commander Operation LAFIYA DOLE, Maj Gen Olusegun Adeniyi as well as the officers and men of Operation LAFIYA DOLE for this commendable feat in service of their fatherland.

He also enjoined them to continue to sustain the pressure on the criminals and ensure there is no hiding place for them and their collaborators.