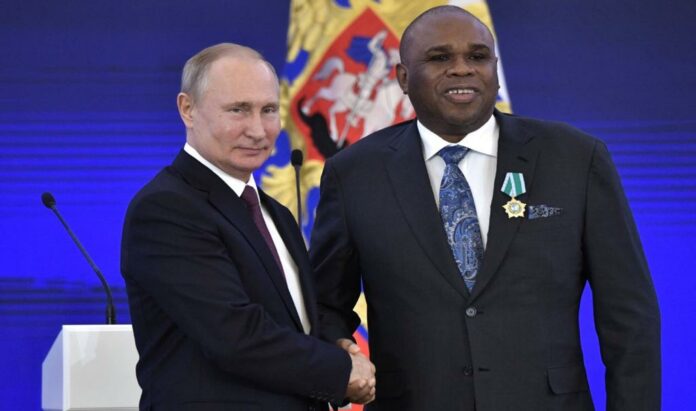 Okey Oramah: How a Global Revitalizer Was Honoured in Russia By Kehinde Olaosebikan

The ultimate in any venture of man is success. Be it business, politics, socio sphere, or even in our day to day activities we live, what every man seeks is success in all his undertakings. Success is however, never complete if it is not recognized.

The result of an endeavor must be seen and recognized by others for its worth. It becomes complete when the success is seen, recognized and distinguished.

This is why the recent intercontinental recognition and celebration of the Nigerian-born, the current President and Chairman, Board of Directors of the African Export-Import Bank (Afreximbank) Professor Benedict Okey Oramah calls for special attention.

In far away Russia, the largest country in the world, Professor Oramah made history on the 4th of November, 2019 as he was conferred with the prestigious national honor of Russia, The ‘Order of Friendship.’

He was celebrated in the Russian seat of power, Kremlin by the Russian President, Vladimir Putin at a very special ceremony.

The ‘Order of Friendship’ is a state decoration established by Boris Yeltsin, the first President of the Russian Federation and is awarded to Russian and foreign nationals for special merit in strengthening peace, friendship, cooperation and understanding between nations and peoples.

Bestowing the esteemed national honor on Oramah, President Vladimir said: “it is in recognition of the role played by Afreximbank (under Oramah) revitalizing trade and economic relations between Africa and Russia as evident in the success of the Russia-Africa Summit and Economic Forum held in Sochi, Russia Federation, between 23 to 24 October and the rapidly rising trade and investment relations between Russia and Africa”

The Federation of Russia, the second most powerful country in the world saw accomplishment in the feats of Professor Oramah beyond his stellar performance in Afreximbank. It recognized and subsequently honoured him for adding value to humanity and global economy. Russia gave the credit of the rapid rise in prosperity in Africa and Russia to the role of Professor Oramah in revitalizing trade and investment relations between the African continent and Russia. An uncommon global feat, largely unprecedented!

At the Afreximbank, Professor Oramah has not only turned around the fortunes of the bank established in 1993, he has implemented highly successful policies and programs resulting in extraordinary raise in the overall resources of the bank and global recognition in less than four years in office. Between 2017 and 2018 alone, Professor Oramah grew the bank’s resources to $806 million, representing an increase of 24 percent as the net income increased to $276 million, representing a 26 percent within one year.

To accelerate the growth of industry and trade in Africa, industrialists, farmers and other business men across the continent are currently drawing from a multi billion dollars facility put at their disposal by the African Export-Import Bank (Afreximbank) under the leadership of Professor Oramah, the Agric Economics graduate of Nigerian premier university, the University of Ibadan.

At the last Annual General Meeting of the Manufactures Association of Nigeria held in Lagos, the Afreximbank President announced that the bank would be making a sum of $500M available as loans to members of the manufacturers association, a first-time gesture from any international financial institution towards growing business in Nigeria and Africa.

Outside industrialization and trade development, Afreximbank, according to the Head of its Communications Department, Mr. Obi Emekekwue, recently acquired a5.2 hectares of land in Abuja for the development of a centre of excellence for medical services. Obi said, the medical centre of excellence would change the medical tourism narrative of Africa and keep it (medical tourism) within the African continent.

As Professor Okey Oramah revitalized his organization, the African Export-Import Bank; revitalized the African –Russian trade and economic relations; revitalized agriculture, industry and commerce in Africa, and now commencing the revitalization of health care delivery in Africa, putting a stop to medical tourism outside Africa and saving us over $3billion external expenses yearly, here is a Toast to the accomplished Revitalizer of Africa, Professor Benedict Okey Oramah: A great African, positively impacting the entire world.