Jaafar, who is the publisher and Editor-in-Chief of Daily Nigerian newspaper used his Facebook account to raise awareness on the plight of the 82-year old unsung heroine, who is now blind and mobilised resources towards her rehabilitation using his Social media handles. 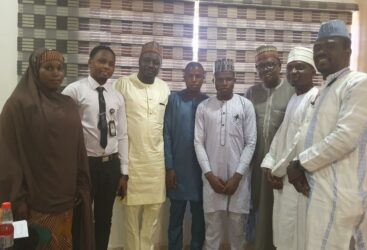 He said said about 576 spirited philanthropists and individuals donated various sums to an account opened to the aged Dambatta, and was able to generate the sum of five million, six thousand two hundred and twenty-two naira (N5,006,222) within a week.

Speaking at the launching of Penlight Centre for New Media and Innovation at PRNigeria Centre, Kano, Jaafar said the gesture signified the power of social media in social mobilization and positive causes.

Dambatta, who now resides in a village in Makoda local government area of Kano State, was a popular artiste who produced numerous advocacy songs in 1970s on the importance of education, good moral values and child upbringing, while also condemning social vices of the time among other things.

She has since gone blind and presently has to beg for money to survive.

Jaafar led three other spirited philanthropists on Monday to pay a sympathy visit to the renowned female Hausa artiste in her country home.

The Daily Nigerian publisher and his entourage said they had spent a good time in the village making assessments and interviewing members of her family, neighbours and community leaders on the best way to manage the intervention.

Meanwhile in a post on his Facebook timeline, Jaafar, said: “After the team (Musa Abdullahi Sufi, Ibrahim Sanyi-Sanyi, Munzali Hausawa and myself) briefed her on the successful fundraiser. She thanked us and all the people who donated for her cause. She also assured us that she will quit begging henceforth.

“Dr Kabir Abdussalam examined her and advised further review of her eye condition. She will be taken to Aminu Kano Teaching Hospital for detailed medical examination and laboratory workup in the first week of January 2020.

“Subsequent management will be based on findings from above. We have already directed an agent in the village to scout around for a plot of land or a house for sale.

“Substantial amount of the money raised will be channelled for either building a new house or buying a house for her.”

Jafar also explained that they have planned for a three years payment of allowances to cater for her food, cloth, healthcare and other daily needs on monthly, quarterly or as the need arises.

Omoyele Sowore’s  Grandmother Dies At The Age Of 100