GOC Dances with Wounded Troops in Hospital in Maiduguri

The General Officer Commanding (GOC), 7 Duvision of the Nigerian Army, Maiduguri, Brig -General Abdul Khalifa, on Sunday rocked the dance floor with wounded troops in the hospital in order to encourage them to recuperate fast. 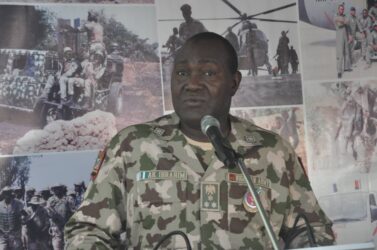 The 7 Division Medical Services and Hospital, held a “New year Party” for its sick and wounded officers and soldiers.

Khalifa, who took to the dance floor with other senior officers, also served meals to the troops.

He said that the new year party was an incentive toward facilitating recuperation of the affected personnel in line with the Nigerian army’s best practice.

He noted that the gesture was with the ultimate objective of achieving better health, raising troops morale and strengthening efficiency.

“We want to appreciate our gallant soldiers who are guests in the 7 Div. Medical Centre.

“Firstly, we thank God for bringing all of us together so that we can appreciate Him and at the same time appreciate the very big sacrifice you are making.

“It is in the course of Operation Lafiya Dole that you were injured and brought to this medical facility.” 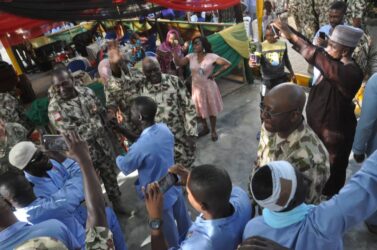 He further urged them not to be deterred but should ignore fake news in the mainstream and social media.

“Myself and my Commanders are in the frontlines and we know what is happening. In 2019, it was a different ball game, but in 2020, things will improve.

“Leadership of Operation Lafiya Dole, more than ever before, we shall continue to be more professional in our Operations, take better care of you so that we can have total peace.

“Once again, I thank you for your sacrifice and urge you to be disciplined, remain hopeful, encourage those in the front line on good leadership so that we can end the war,” he said.

Major MO Balogun, the Commanding Officer 123 Special Force Battalion, Cross Kauwa, who spoke on behalf of his colleagues commended the efforts of the Nigerian military towards their welfare.

“We thank the Nigerian Army for taking care of us through improved welfare for our happiness.

“If we are discharged, we will continue fighting and that is the message we want to give to you sir, we will not relent,” he said.

Can Fani-Kayode Bring Secessionist Agitators to the Peace Table? YAShuaib