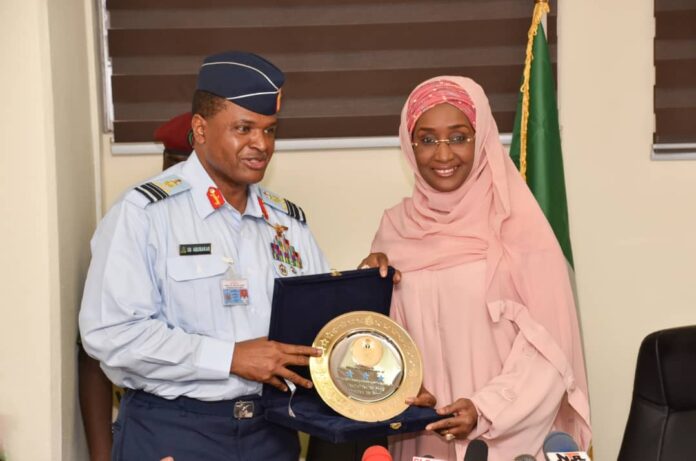 The Minister for Humanitarian Affairs, Disaster Management and Social Development, Hajiya Sadiya Umar Farouq, has commended the Nigerian Air Force (NAF) for its efforts in the fight against insurgency in the Northeastern part of the Country as well as for its numerous humanitarian interventions towards ameliorating the sufferings of Internally Displaced Persons (IDPs) and other vulnerable Nigerians. The Honourable Minister made the commendation while playing host to the Chief of the Air Staff (CAS), Air Marshal Sadique Abubakar, in her office at the Federal Secretariat in Abuja. The efforts of the NAF at bringing the war against insurgency in the Northeast to a conclusion, she said, would greatly help in returning the IDPs to their respective communities. The Honourable Minister also expressed the Ministry’s willingness to support the NAF by empowering young graduates in NAF Bases through the Federal Government’s youth empowerment programme, popularly known as N-Power.

Speaking further, the Honourable Minister expressed her appreciation to the NAF for the enormous support it had given to the Ministry since it was created. She added that the efforts of the NAF in ensuring the safety of the lives of Nigerians was highly commendable, noting that even while she was Federal Commissioner of the Refugees’ Commission, the NAF had always provided needed assistance and aid to civil authority in such areas as medical outreaches, humanitarian airlift and many others. She noted that the Ministry was aware that the NAF has a Directorate of Civil Military Relations, with which, she said, the Ministry would work closely to support IDPs and other vulnerable people in the society.

Hajiya Farouq added that the Federal Government had 4 social intervention programmes, which it would be willing to extend to the NAF. She therefore suggested that a joint team of officers from the NAF and the Ministry be set up to explore ways of maximizing the benefits of their mutual collaboration. She further disclosed that the Ministry would also initiate action to recruit some graduates from NAF Bases into the N-Power Programme and deploy them to NAF Schools to boost the strength of the teaching staff. She equally promised to reach out to the Ministry of Defence and Federal Civil Service Commission to regularize the status of unestablished teaching staff in NAF Schools, which she described as some of the very best schools in the Country.

In his remarks, the CAS, while congratulating the Minister on her appointment, noted that the Ministry, within the very short period of its establishment, had been able to touch the lives of many Nigerians through its various initiatives. He expressed the willingness of the NAF to key into many of the initiatives of the Ministry, which he said would further enhance the wellbeing of NAF personnel in different theaters of operation across the country. He further noted that the NAF would be highly delighted if the Ministry could extend the school feeding programme to NAF primary schools located in different parts of the country as well as key into the NAF Barracks Youth Empowerment Through Agriculture (BYETA) Programme for personnels’ dependants.

Air Marshal Abubakar assured the Honourable Minister of the NAF’s continued support in the airlift of humanitarian supplies. He disclosed that the NAF is currently better positioned than before as a result of the Federal Government’s support that had enabled the reactivation of two C-130 Hercules aircraft, which are capable of carrying up to 20,000 Kg of cargo per mission. He added that the NAF was most willing to deploy other aircraft types to convey officials of the Ministry whenever the need arises to any part of Nigeria or Africa. The CAS also noted that, statutorily, the NAF has a serving Air Commodore as the Director of Search and Rescue at the the National Emergency Management Agency (NEMA) and also currently has some of its pilots, engineers and other personnel attached to the Agency, who have all continued to work assiduously for the success of NEMA.

The CAS was accompanied on the visit by some Branch Chiefs and Directors from Headquarters NAF. Also in attendance to receive the CAS were the Permanent Secretary in the Ministry, Mr Tijjani Umar, Chief of Staff, Air Vice Marshal Saleh Shinkafi (retired), as well as other Directors in the Ministry of Humanitarian Affairs.