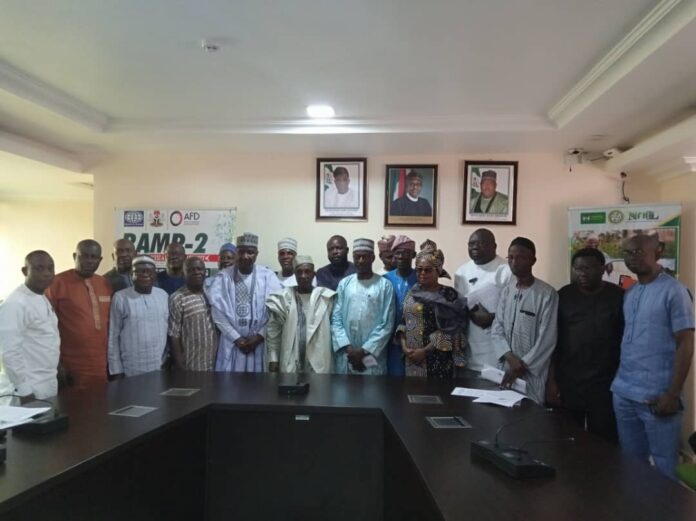 The Minister of Agriculture and Rural Development, Alhaji Muhammad Sabo Nanono has tasked the All Farmers Association of Nigeria (AFAN) to Support the Federal Government in driving the Agriculture Mechanization Programme, stating that the Programme would ensure food and nutrition security, create jobs and boost the economy..

The Minister made this known while receiving a delegation of the newly elected Executive of the Association led by the National President, Alhaji Farouk Mudi in his office in Abuja, recently.
Nanono noted that the challenge of feeding the Nation’s growing population and creating a robust economy, food security and job creation would be a mirage without the Farmers being fully involved  in the Mechanization of the Agricultural sector.
He observed the need for the association to be independent minded and more focused. According to him, the association is a private organization, ‘’ it is entirely a Private Association and should be free from the influence of the Federal, State or Local Government Areas.’’
The Minister further said that in the recent past, ‘’those with little or no knowledge of farming or farmers, had hijacked the activities of the farmers for their selfish interest against the goals and objectives of the association’’.
He assured that the Federal Government will work with AFAN as major Stakeholders in the Agric sector.
The Minister also highlighted the three critical components of the Ministry’s policy thrust in which the desired transformation of the sector would become a reality to include; Mechanization, Research for Improved Seedlings and Effective Extension Services.
He appealed to AFAN to mobilize and sensitize the farmers, especially in the Local Government Areas to key into the Programme when it is implemented, adding that the Programme would be owned by the farmers.
Earlier in his address, the President of AFAN, Alhaji Farouk Mudi, appealed to the Minister to revisit and fine tune the issue of the Growth Enhancement Support Scheme (GES), which he believes would boost farmers production, create jobs and increase internally generated revenue.
Mudi further said that ‘’ Agriculture should be seen as a business and not a cultural practice. It must be structured, developed and financed as business for us to fully unlock its potentials’’.