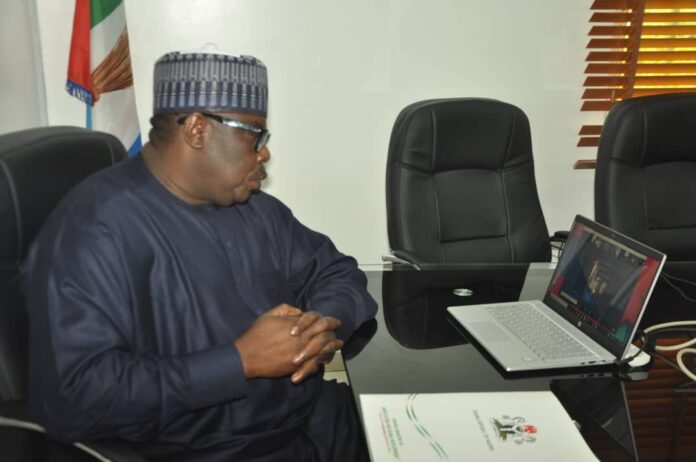 The Minister of State for Agriculture and Rural Development, Honourable Mustapha Baba Shehuri, has said that the greatest solution to rural-urban migration in Nigeria rests on the ability for stakeholders to establish a strong link between agriculture and housing.
Baba Shehuri stated this during the opening ceremony of the first virtual edition of the Abuja International Housing Show (AIHS) which commenced today Tuesday 21st July for the 14th year running.
The Minister explained that a properly developed system will be an added incentive for many farmers to live close to where they farm. He therefore advocated the need for a link between agriculture and housing to help birth this project to increase the productivity of farmers, expand their income and achieve a significant growth in the nation’s economy.
In his words, “the commitment of the present administration to agriculture and rural development has birthed a lot of policies and programmes that are already making significant differences in the sector. It is envisaged that farmers should be entitled to the opportunity of owning a home through their farming activities executed around the proposed Agricultural Industrial Parks, Green Houses and Staple Crops Processing Zones”. He further submitted that “the yield from their farms which are sold to off-takers guarantees them adequate security to demand” and to be entitled to “a housing loan or mortgage” for which reason he called for a strong partnership between the housing and agricultural sectors.
The Abuja International Housing Show has other speakers inclusive of Minister of Works and Housing, Mr. Babatunde Fashola, the CEO, Reall United Kingdom, Ian Shapiro, a representative of the Canadian International Housing Finance, Andre Asselin, MD FMBN, Ahmed Dangiwa among others. The event will be concluded on the 25th of July.
Ikemefuna Ezeaja
For Director Information.