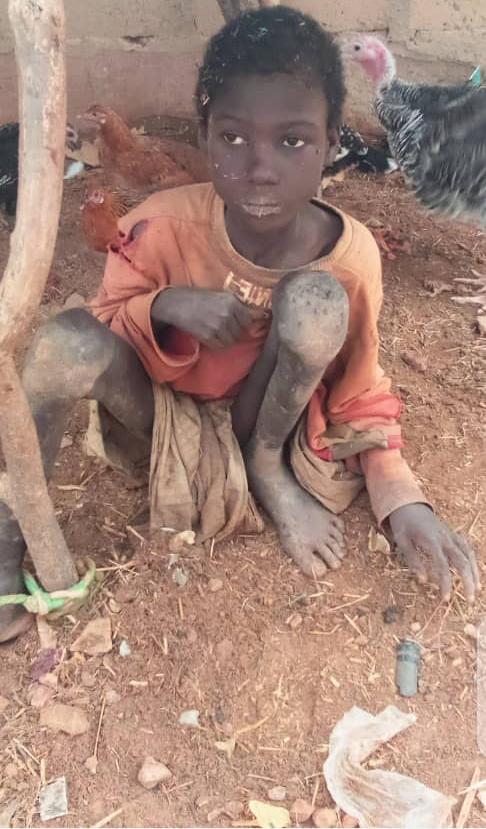 In the early ours of Sunday 8th August, 2020, a High delegation from the kebbi state Government has taken over all the responsibilities of an abandoned child who was rescued by a human rights group. The child in question is a boy of ten (10 yrs) years who was chained in the stall of goats like animal for over two years. The boy named Jamilu Aliyu unfortunately lost his biological mother two years ago, he thus, fell under the custody of his biological father and two step mothers. He was practically denied food, hence, resorted to feeding upon the food given to the animals he was staying with in the same stall. Sometimes he used to eat his own ‘faeces’ for his survival.

In consequences, he emaciated, dehydrated and partially deformed, He limps like an ape and behaves like animals. He is too pitiable to behold.

The state delegation visited the rescued boy at Sir Yahaya Specialist Hospital Birnin Kebbi where he is responding to treatment. The state government has taken all responsibilities of the boy. His medical expenses, education and everything.

The state delagation however, comprising of:

Finally, His father Malam Aliyu Badariya and his two step mothers are already in the police custody. They will face the full wrath of the law or better still, they will soon be taken to court for justice to take its course.

Suffice it to say that, His Excellency Senator Abubakar Atiku Bagudu has since submitted a bill to the State House of Assembly which seeks to provide further protection , medical assistance as well as penalties for such offences. When passed into law, it would help in eliminating or reducing this kind of crime as well as give medical assistance within the ambit of the law.