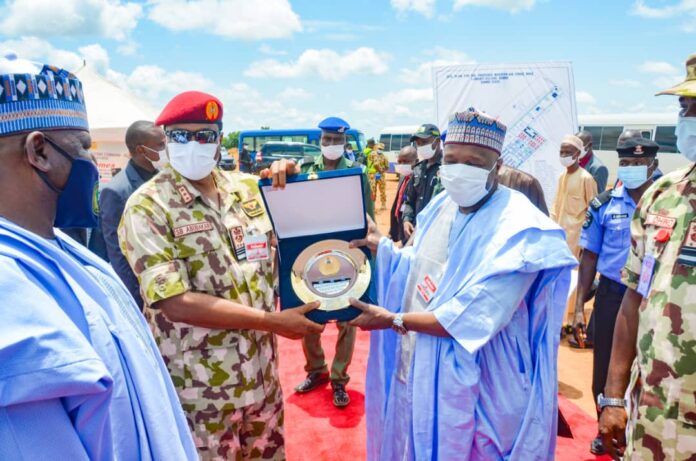 As part of concerted efforts to emplace structures to more effectively deal with the security challenges in the North East and indeed the entire Country, the Nigerian Air Force (NAF) today, 7 September 2020, flagged off the construction of infrastructure for a newly established Unit, the 203 Combat Reconnaissance Group (203 CRG), in Gombe State. The new Unit, which would serve as the Base for Unmanned Aerial Vehicles (UAVs) and other air assets, is expected to bring new capabilities to the spectrum of the NAF’s operations thereby further enhancing the ability of the Service to contain threats to the nation and its citizens.

Speaking during the ground breaking ceremony, which had the Executive Governor of Gombe State, Alhaji Muhammad Inuwa Yahaya, as the Special Guest of Honour (SGOH), the Chief of the Air Staff (CAS), Air Marshal Sadique Abubakar, stated that the newly established Base which sits on 230 hectares of land donated by the Gombe State Government, is strategically located to enable the NAF more effectively respond to contingencies in the North East. He noted that the establishment of the Unit would add significant value to the operations of the Service in the fight against insurgency and other security challenges in the Country. The CAS stated further that, in line with his Vision for the Service upon assumption of Office in 2015, the NAF organizational structure had been expanded from the erstwhile 4 Commands to 6 with the creation of 2 new Field Commands, one of which is the Special Operations Command (SOC) headquartered in Bauchi, as well as several new units including some Quick Response Groups and Quick Response Wings, to bring security closer to the people of Nigeria. These new units, he said, included those located at Gembu in Taraba State; Gusau in Zamfara State; Owerri in Imo State; Agatu in Benue State Kerang in Plateau State; Ipetu Ijesha in Osun State; Lafia in Nasarawa State as well as Birnin Gwari in Kaduna State, amongst others. Air Marshal Abubakar also noted that, in response to the security imperatives in the North East of the Country, the NAF had particularly expanded its facilities at the Headquarters of the Air Task Force of Operation LAFIYA DOLE in Maiduguri, Borno State as well as at the NAF Base in Yola, Adamawa State, while a Unit had been established in Damaturu, Yobe State. “These new units and expansions, coupled with others carried out across the Country, have undoubtedly enhanced the capacity of the NAF to ensure that Nigeria is secured and our citizens are able to pursue their legitimate aspirations without fear”, he added.

Speaking further, the CAS noted that the establishment of the Base in Gombe was yet another clear testimony of the Federal Government’s commitment to overcoming the security challenges in the North East and indeed the entire Country. “The Commander, as well as the first set of personnel to man the Unit, are already posted to Gombe and, in the days and weeks ahead, they will work with the State Government to ensure that the Group is ready to commence active operations in the shortest possible time”, he added

While pledging that the NAF would continue to work assiduously for the security and unity of the Nation, the CAS expressed appreciation to the Commander-in-Chief (C-in-C) of the Armed Forces of Nigeria, President Muhammadu Buhari, for his continued support to the Service towards the achievement of its desired Air Power objectives. He also thanked the National Assembly, especially the Chairman and members of Senate and House Committees on Air Force, for their support the Service. Air Marshal Abubakar also specially appreciated the Gombe State Governor for allocating the 230 Hectares of land to the NAF as well as for the support of the Government and good people of the State towards the actualization of the project. The CAS equally commended the dedication, sacrifices and commitment of NAF personnel while urging them to remain focused and redouble their efforts to ensure that peace is restored to all troubled parts of the Country.

In his remarks, the SGOH, the Executive Governor of Gombe State, while commending the CAS for his excellent record and sterling leadership of the NAF which had resulted in giant strides, expressed great delight at the efforts put in place by the Service to fast-track the establishment of a Base in Gombe State on land that was allocated barely a month ago. The Governor also applauded the quality of Air Marshal Abubakar’s leadership of the NAF as portrayed in the prudent management of scarce resources. He noted that, the NAF had been involved in numerous operations to restore security across the Country with commendable results. He added that the 203 CRG would surely change the dynamics of combating insurgency in the North East and internal security operations in Gombe State. The Governor therefore thanked the C-in-C as well as members of the National Assembly for appropriating and approving the funds for establishment of the Base in Gombe. Governor Yahaya expresses optimism that the take-off of the Base would result in job opportunities for the host communities while further boosting the excellent relationship between the NAF and the Gombe people. He disclosed that the State Government, on its part, would continue to provide necessary support to ensure the smooth operations of the Unit.

Earlier in his welcome address, the Air Officer Commanding (AOC) SOC, Air Vice Marshal Charles Ohwo, while appreciating the CAS for his untiring support which had enabled the Command to keep pace in tackling the various security challenges within its Areas of Responsibility, noted that the 203 CRG Gombe would further enhance the NAF’s ability to meet the demands of the changing security environment while covering some of the capacity gaps in its counter insurgency and anti-banditry operations. According to him, “The actualisation of this Group would ensure that adequate situational awareness is maintained across the various theatres, thereby enhancing our air operations in the fight against insecurity for the overall well-being of the citizens”. The AOC added that the siting of the Group in Gombe would also add to the maintenance of internal security posture in the State, in collaboration with other security agencies, whilst also impacting positively on the host community, through various civil-military relations activities.