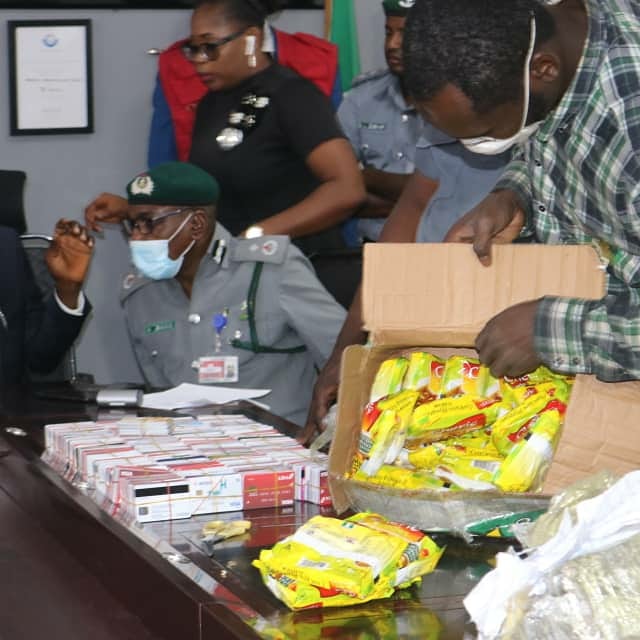 PHOTO: NCS Intercepts 2,886 ATM from a Traveller Going to Dubai

Thousands of Automated Teller Machine (ATM) cards and a number of Subscriber Identification Module (SIM) cards have been intercepted by the Officers and Men of Murtala Muhammed International Airport Command, Nigerian Customs Service.

This took place late August when the Officers and Men were carrying out routine baggage examination in line with the statutory responsibilities. Fortunately, they detected that a passenger Ishaq Abubakar Abubakar with Passport Number A08333717 who was bound for Dubai flight had ingeniously concealed the aforementioned items in an Indomie Carton and was making his way to board the Emirates Evacuation Flight.

The Legal Adviser of the Service, Mr Smart Akande esq. who represented the Comptroller General of Customs, handed over a total of 2, 886 ATMs with four SIM cards to Economic and Financial Crime Commission (EFCC) for further investigation, due to the nature of the offence. The event took place at the Federal Operations Unit Zone ‘A’ Ikeja.

The CGC while quoting the statement made by the suspect said that “one Mr. Musliu Suleiman had been assigned to facilitate a smooth movement for the suspect, but the Customs Officers on duty who had insisted on thorough checks and physical examination were able to detect the concealment”.

He reaffirmed the commitment of Nigeria Customs Service to ensure a safe border, and a healthy economy. He advised the general public to protect their personal items such as ATM cards and SIM cards from predators.