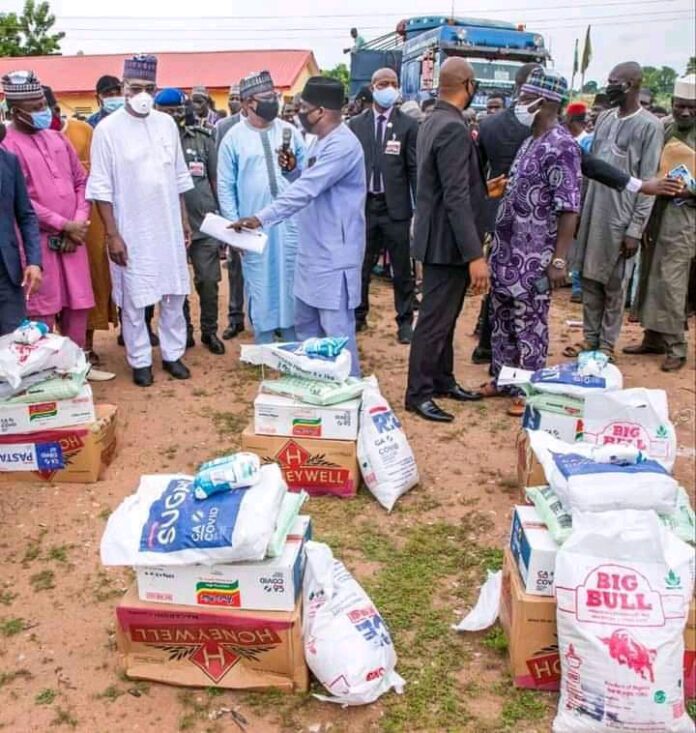 After series of attacks by hoodlums In Ilorin, Governor Abdulrahman Abdulrazak of Kwara State has declared a 24-hours curfew within the city.

In a a state broadcast, Abdulrazak said the decision became necessary to save lives and properties.

The curfew which is restricted within Ilorin Metropolis which takes effect this midnight.

This came after residents looted the COVID-19 palliatives warehouse and  proceeded to the office of theNigerian Customs Service (NCS) demanding access to the facility.

Many video footage and pictures obtained by PRNigeria showed people carting food items like noodles, spaghetti, rice, sugar and garri from the warehouses and shopping mallsbin the city.

Meanwhile, security operatives shot sporadically into the air to disperse the thugs, where some hoodlums were injured.

I have just had an emergency security meeting with commanders of various security agencies in the state. This is to assess the situation in the state. Over the last few days, I had earlier met with the traditional rulers, opinion leaders, members of the student community, and many other stakeholders in the state.

Our observation is that what has happened so far today was not a protest. It cannot be defended under any guise.

It was a pure act of criminality. Some persons are hiding under the nationwide tension to commit crimes.

The government has a duty to protect law abiding citizens and their properties.

Lives are being threatened. Businesses are being looted. Public properties have been targeted. This is unacceptable. It is not who we are.

To curb these acts of criminalities, I hereby declare a 24-hour curfew in Ilorin metropolis from midnight today October 23rd, 2020. This is in line with Sections 1, 2 and 4 of the Public Order Act Chapter 382 Laws of Federation of Nigeria 2004.

People are urged to stay indoors in compliance with this curfew. This will be reviewed as we watch developments.

While the curfew is on, security forces have been placed on the alert to maintain strict compliance. I urge citizens to comply by this declaration which is meant to protect lives and properties.

Finally, we apologise to our people and businesses that have been badly hurt. I urge them to be calm while we stop the criminality now.