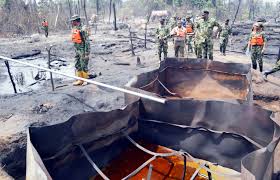 1. The Armed Forces of Nigeria and other security agencies have continued their major operations across the country with attendant results. This briefing will cover from 30 October – 4 November 2020.
NORTH-WEST ZONE

2. In continuation of intensive clearance operations in the North-West zone of the country, troops of Operation HADARIN DAJI have continued to record serial successes against armed bandits with significant results. The period in focus witnessed decline in criminal activities in the zone. However, within the period under review, troops of Operation SAHEL SANITY reacted swiftly to a distress call about bandit’s activities that attacked Diskuru village in Faskari Local Government Area of Katsina State. The gallant troops engaged the criminals in a fierce fire fight forcing them to withdraw in disarray while 3 bandits were neutralized by the troops as several others escaped with various degrees of gunshot wounds. During the exploitation phase, 2 additional bandits’ bodies were discovered along their withdrawal route. Equally, 3 women and their infants earlier kidnapped by the bandits were rescued. Regrettably, one brave soldier paid the supreme price in an attempt to save one of the rescued nursing mothers in the heat of the encounter.

4. Deducing from the above successes, it is clear that troops of the Armed Forces of Nigeria working with other security agencies are committed in their endeavor to end banditry and other sundry crimes in the country. While the good people of the North West are once again assured of Armed Forces of Nigeria’s commitment to the safety of lives and property within the zone, they are also encouraged to continue to avail the troops with timely and credible information that will assist them in the operations.

5. In the North East zone, the Armed Forces of Nigeria working together with other security agencies have continued to sustain the onslaught against the insurgents. Within the period under review, troops recorded appreciable successes as several terrorists were neutralized, while many were arrested with caches of arms and ammunition. Between 30 October and 4 November 2020, troops conducted comprehensive ground and air operations.
6. Within the period, the Land Component of Operation LAFIYA DOLE under its subsidiary Operation FIRE BALL exhibited its operational readiness and repelled terrorists’ attacks on troops’ location at Army Super Camp, Damboa in Borno State. With superior fire power and support from the Air Task Force, troops neutralized 22 insurgents while several others escaped with various degrees of gunshot wounds. During the encounter, troops recovered caches of arms and ammunition as well as of their equipment. Equally, troops of Operation FIRE BALL in conjunction with local vigilante arrested a BHT/ISWAP member identified as Mohammed Bello at Damaturu Town in Yobe State. The terrorist was arrested while trying to purchase arms and ammunition, while he was in possession of one AK-47 rifle and a magazine. The criminal element has been handed over to appropriate prosecuting agency for necessary action.
7. Meanwhile, within the period under review, the Air Component of Operation LAFIYA DOLE conducted several air operations involving both offensive and support missions. With the use of a force package of Nigerian Air Force fighter jets and helicopter gunships, the Air Task Force conducted Intelligence Surveillance Reconnaissance missions over various locations in the North East. The air surveillance missions revealed terrorist’s activities and their hideout which enabled the Air Task Force to execute air interdictions and strikes on the identified locations, causing devastating hits on the terrorists’ hideouts at Mudu and Garin Maloma Villages in Borno State. Scores of their fighters were neutralized and their structures and logistics facilities destroyed.
8. From the records of these operations, it is glaring that the Armed Forces of Nigeria and other security operatives are resolute in their determination to end the insurgency and achieve sustainable peace in the North East zone of the Country.

9. In the North-Central zone, troops have continued to intensify aggressive clearance operations amongst others, to decisively curtail activities of armed bandits and other criminals. This has led to a gradual reduction in the activities of criminality in the zone. Notably, within the period, troops of Sector 2 Operation WHIRL PUNCH while on patrol at Bassa village in Shiroro Local Government Area of Niger State repelled armed bandits attack. In the course of the encounter, several bandits were neutralized. Also, within the period in focus, troops of Headquarters Command Army Records Lokoja in conjunction with Defence Intelligence Agency operatives arrested 4 suspected criminals with 3 locally made guns at Auko village along Lokoja- Abuja Highway in Kogi Local Government Area of Kogi State.
10. In another development, between 29 October and 3 November 2020, Headquarters Operation SAFE HAVEN conducted extensive Civil Military Cooperation activities to cultivate cordial relations with the various ethnic groups in Plateau State. Notably, on 29 October 2020, Headquarters Operation SAFE HAVEN fostered security meetings with stakeholders from Kibadu, Foka and Ungwar Doruwa villages in Kauru Local Government Area of Kaduna State. This was followed by another round of meetings on 30 October 2020 at Gero village in Jos South Local Government Area of Plateau State. Furthermore, meetings were held with Heads of Security Agencies and Local Government Chairmen on 31 October 2020. Same day, Peace Meetings were also held with representatives of Fulani, Irigwe, Berom, Hausa, Afizere and Rukuba communities in Jos South and Bassa Local Government Areas of Plateau State, and Godo-Godo District of Jama’a Local Government Area of Kaduna State.
11. As it is, these meetings were organized in continuation of peace and reconciliation efforts amongst the various ethnic groups in the zone. The meetings focused extensively on farmers/herders clashes, kidnapping, farm encroachment/destruction and other sundry security challenges in the State. Furthermore, on 2 November 2020, Headquarters Operation SAFE HAVEN commissioned 5 boreholes at Angwan Rana, Kurmin Masara, Boto, Zikpak, and a solar energy panel project in Sabon Kaura clinic in Kauru, Zangon-Kataf and Jama’a Local Government Areas of Kaduna State respectively. This was followed by the commissioning of a newly renovated Administrative Block at Government Secondary School Gidan Waya in Jama’a Local Government Area. Consequently, the locals are requested to cooperate with the security agencies by availing them with the required information which will be useful to our collective objective of taking out the criminals from the zone.
SOUTH-SOUTH ZONE

12. Troops of Operation DELTA SAFE have continued with the aggressive fight against crude oil theft, pipeline vandalism and economic sabotage in the zone with significant successes. Notably, within the period in focus, troops of Operation DELTA SAFE discovered and immobilized 3 illegal refineries containing 7 boilers, 2 reservoirs and 2 tanks loaded with illegally refined oil products around Orutoru in Bonny Local Government Area of Rivers State. Additionally, troops in conjunction with local vigilante arrested 5 suspected cultists at Jesse Community in Ethiope West Local Government Area of Delta State. Similarly, troops of Operation DELTA SAFE while on patrol arrested a suspected armed robber with locally made pistol at Igbudu Market in Warri South Local Government Area of Delta State.
13. In another development, Operation CALM WATERS II and Operation SWIFT RESPONSE have continued to record more successes. Between 30 October and 3 November 2020, Forward Operating Base IBAKA gunboats while on routine patrol around Utan Iyata intercepted and arrested 2 wooden boats laden with 326 of 50kg bags of foreign parboiled rice suspected to be smuggled in from Cameroon. The arrested items have been handed over to the Nigerian Customs Service for further action. On 30 October 2020, Forward Operating Base IBAKA patrol team intercepted and arrested one small size wooden boat laden with product suspected to be Premium Motor Spirit (PMS) along Mbo River, being smuggled to the Republic of Cameroon. Items recovered from the arrest include one small size wooden boat, forty four 300 litres drums of PMS, one pumping machine and two 40 HP Yamaha engines. The arrested items have been handed over to the appropriate prosecuting agency for necessary action.
14. The Military High Command commends all the gallant troops of the Armed Forces and personnel of other security agencies involved in various operations across the country for their commitment, determination and dedication. They are equally encouraged to remain firm and decisive in curtailing the activities of all criminal elements in the country. Members of the general public are hereby assured that the Armed Forces of Nigeria working with other security agencies will continue to tackle the security challenges and will ensure that normalcy is attained in all the geo-political zones of the Country. However their support is highly solicited in the area of providing credible information to assist our operations. Thank you.