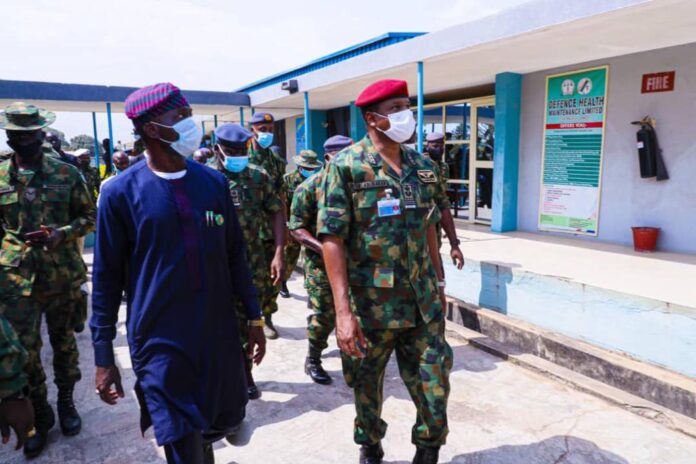 The Executive Governor of Oyo State, Engineer Seyi Makinde, has commended the contributions of the Nigerian Air Force (NAF) to the enhancement of security in the State.

He expressed delight that the 671 NAF Detachment Ibadan had continued to discharge its duties professionally whilst maintaining good cordial relationship with its host communities, in particular, and the people of Ibadan, in general.

The Governor gave this commendation yesterday, 11 November 2020, while receiving the Chief of the Air Staff (CAS), Air Marshal Sadique Abubakar, on a courtesy call at Government House Ibadan. The CAS, who was on an operational visit to Ibadan with a view to consolidating NAF’s presence in the South West Geopolitical Zone, also conducted an assessment tour of facilities at the Air Force Comprehensive School (AFCS), Ibadan, which, because of its remote location, was yet to be connected to a reliable mains power source.

Speaking further during the courtesy visit, Engr Makinde, while thanking the CAS for looking towards the South West in general, and Oyo State in particular, to expand its facilities, noted that the State Government was in the process of upgrading the facilities at the Ibadan Airport.

He disclosed that the runway would be expanded and refueling facilities emplaced to bring the Airport to international standards and make it more economically viable for commercial air operations.

He further disclosed that a contract had already been awarded for the construction of the Ife Road that traverses Ajia to the Airport. He said this would create access so that a new NAF Base could be built close to the Airport. The Oyo State Governor equally directed the State Ministry of Works to look into how to resolve the power connection problem at the AFCS Ibadan.

Speaking earlier, the CAS, who was accompanied on the visit by the Deputy Chairman of the House Committee on Air Force, Honourable Abbas Adigun, as well as the Air Officer Commanding Logistics Command, Air Vice Marshal (AVM) Lawal Alao, the NAF Chief of Administration, AVM Aliyu Pani, and other senior NAF officers, stated that the NAF had expanded its organizational structure over the last 5 years, by creating 2 new Commands and 2 new staff branches as well as establishing several new units across the country.

He noted, however, that the Service intends to further expand its presence in the South West Geopolitical Zone because, at present, it only had units in Lagos and Ipetu-Ijesha while the Unit in Ibadan was inadequate to meet the Air Power requirements of the Service for the Zone.

He said the NAF therefore intends to key into the Airport upgrade project to expand its presence in Ibadan by building a new Base along with necessary support facilities so as to have an alternate Base for the C-130H fleet to operate from. “We are interested in keying into the Airport expansion plan so that we can have Ibadan as another base for the C-130H aircraft that we operate in Lagos so that when we have any problem, we don’t have to fly from Lagos”, the CAS said.

Air Marshal Abubabkar, while highlighting the state of infrastructure at the AFCS Ibadan, announced that the School had emerged as the overall best public secondary school in Nigeria in the last West African Examination Council (WAEC) examinations. This, he  noted, underscored the need to, as matter of priority, get the School connected to reliable mains power supply.

After inspecting facilities, including classrooms, medical centre, male and female students’ hostels as well as the dinning halls at the AFCS Ibadan, Air Marshal Abubakar, who was conducted on the tour by the Commandant, Group Captain Babatunde Apoola, took time to interact with the teachers and other staff of the School. The CAS used the opportunity to specially thank them for their selfless service in building the capacity of the students and grooming them to consistently produce good results over the years. He noted that this was clear evidence of their commitment to duty, despite the numerous challenges facing the School. He said the Service would do its best to critically look at the issues raised on allowances of unestablished staff and the need to renovate the hostels and improve the condition of the dinning, amongst others.