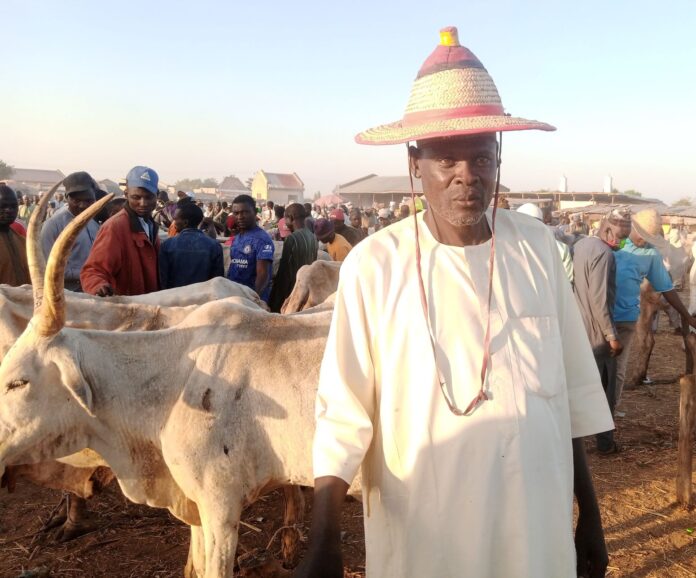 The Sarkin Zango and leader of Fulani Traders at the popular Cattle Market at Kwanan Dangora, in Kano, Sulaiman Yunusa Gwarmai has reacted to a recent report of harassment and extortion by policemen in the area.

During a fact-finding investigation by PRNigeria, Gwarmai told the reporters the incidence did not occur at the Kwannan Dangora Market, but at Kwannan Dawaki, some months ago.

While confirming the incidents in the past, the Leader of the Fulani traders said the prompt intervention of police leadership facilitated the peace in the community.

“Yes… It was true the arbitrary arrests and extortion by some people in uniforms claiming to be policemen. The present commissioner of Police, Mallam Habu Sani had promptly intervened and the problem has been resolved. In fact, we have witnessed relative peace for over three months now as we carried out our tradings and activities in the market peacefully.

“When the DPO followed up on the matter with the OC SARS, they swung into action and made all his men who extorted us at the time to return the money. That’s when the Police Commissioner ordered that a Police patrol vehicle be stationed for us here every market day, you would have seen them. Ever since we have been conducting our trade peacefully.” Gwarmai narrated.

Responding to a recent radio programme on the issue, Gwarmai said it could have been current development.

“We just head the claims on one ‘inda ranka’ program, this was in the past when it happened to about four or five traders here and even the incidence in reference happened outside this market premises, somewhere in Kwanan Dawaki, not Dangora Cattle Market. I wish to seize this opportunity to thank the Kano State Police hierarchy and their officers and men. For now, appreciate their efforts.” Gwarmai submitted.

Reacting, the Police spokesperson in Kano, DSP Abdullahi Harun Kiyawa disclosed that some of the security challenges in major markets have been addressed with adequate police patrols.

“Recently we caught two people, one of them disguised as police and went to post bail for another who was accused of possessing arms not knowing he was also extorting these people. To be sincere with you, since the time that report was aired, it has demoralized senior police officers in the state.
“It is unfortunate that some reporters don’t seek comments from the Police like the reporter of that radio programme who didn’t contact leaders of the Cattle Traders before going to air with his story.

PRNigeria reports that about two weeks ago, a popular radio station in Kano aired a report claiming that men of the Special Anti-Robber Squad (now disbanded) usually come from Abuja in connivance with Policemen in the State to arbitrarily arrest unsuspecting Fulani Cattle Traders, accuse them wrong and extort them of huge sums.