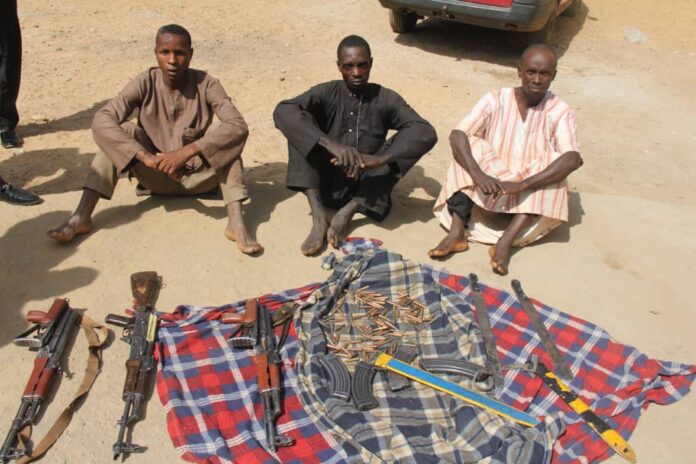 On 24/12/2020 at about 1730hrs, a combined team of Policemen and vigilante group while on stop and search duty along Tulu-Rishi road, pursued a suspected Bajaj motorcycle ridden by one Sabo Samaila Barume ‘m’ aged 30yrs of Shande kurmi of Burra District, Ningi LGA, on board Ado Juli ‘m’ aged 20yrs and Abu Saini all ‘m of Ganji village Burra District, Ningi LGA. They were arrested in possession of the above mentioned exhibits, wrapped in a towel and took to their heels on sighting the patrol team as they abandoned the exhibits after a hot chase which led to the arrest of Ado Juli and the cyclist Sabo Samaila while Abu Saini escaped to unknown destination.

However, Ado Juli voluntarily confessed to had conspired with Abu Saini collected the rifles from one Samaila Saini ‘m’ at Ganji, Burra bush of Ningi LGA, with instruction to convey the exhibits to one Goska ‘m’ at Zalau village along Rishi-Gumau road of Toro LGA.

On reaching Gamadore hamlet of Burra area, they boarded a motorcycle ridden by the same arrested cyclist Sabo Samaila with the view to convey them to Zalau village, while on the process; the (Cyclist and Ado Joli) were arrested after an ensued battle.

Investigation is ongoing as joint efforts are being intensified to trace and arrest the fleeing suspects.

The Commissioner of Police directed that the case should be transferred to SCID for discreet investigation.