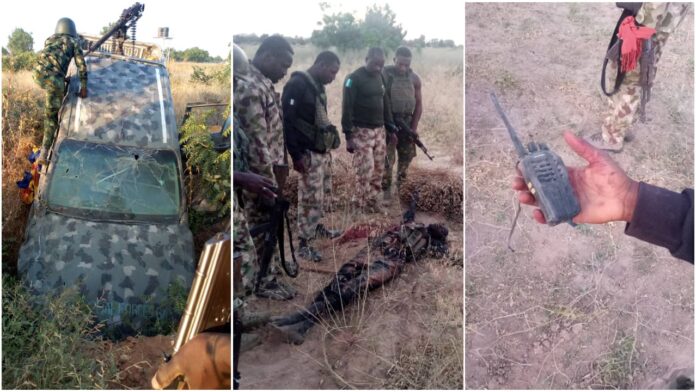 The Nigerian troops have eliminated some Boko Haram fighters in a strategic ambush at Tunkushe village in the northeastern part of Borno state.

The insurgents wearing military uniforms in two Hilux vans mounted with Anti Air Craft guns, were ambushed by gallant troops in Tunkushe, located about 20 kilometres to Maiduguri, the Borno capital.

A military source told PRNigeria that the attackers were suspected to be from the Islamic State in West Africa Province (ISWAP).

“The attempted attack by the terrorists was repelled by the troops of 212 Battalion of the Nigerian Army in a very strategic ambush in a heavy gunfight that lasted for more than 30 minutes.

“While two soldiers were wounded in the encounter, at least three dead bodies of the attackers can be seen here as the troops are still pursuing fleeing members of the group

“Items recovered from the insurgents include; one gun truck mounted with Anti Air Craft gun, AK 47 rifle, buffen radio and various types of other ammunition. Several traces of blood were also seen along the route where the remaining insurgents escaped in disarray,” he concluded.