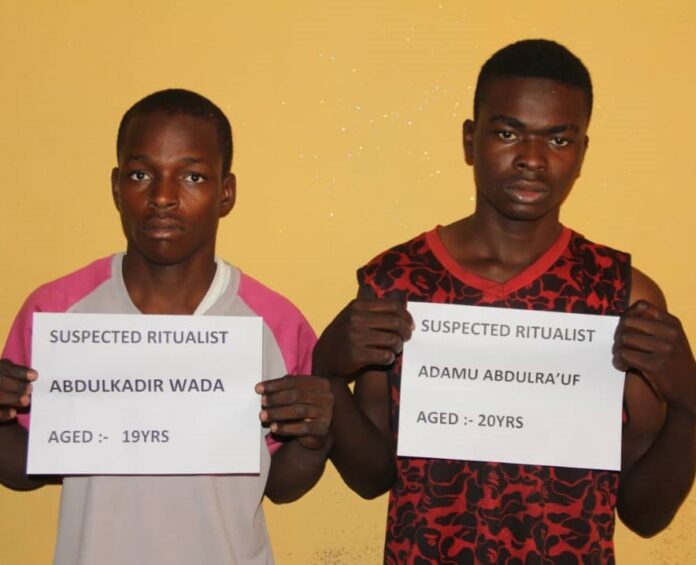 As we work towards the actualization of a crime free State, where the unsavory activities of criminal merchants desperate to make a living at the expense of the law-abiding citizens of the state has put us on the chase and we are delighted that the force, our personnel and units, did not fall short of expectations.

During the week under review the Command has fought tirelessly in raising policing standards which has led to significant milestones in the combat against crime and criminality.

In a related development, sequel to the genital mutilation of a minor by suspected ritualist, during a terrifying incident which occurred in Jamaare Local Government Area (LGA) on 30th December, 2020:

The fleeing suspect, 19years old Abdulkadir Wada Haladu, of Chikamidari area of Jamaare L.G.A has been arrested in Mararraba Nasarawa State where he voluntarily confessed to the unfortunate crime.

In furtherance to our commitment in cracking down on criminal Conspiracy, house breaking, indecent act, thugs and thuggery, the Command has made adequate use of intelligence gathering towards continuous maintenance of Law and order and this has continued to yield positively.

Findings reveal that on same day of their arrest at about 2000hrs, they had conspired among themselves and organized a party suspected to be sex party with attendant series of atrocities within Dass town. The suspects will be profiled and charged to court.

Also, on the 11th January, 2021, at about 1200hrs, a joint team operation led by the DPO Darazo, arrested one Sadiq Isah alias Gojirgo, 25yrs of age from Darazo LGA, following multiple complaints by the community against his conduct. Over the months, Sadiq is suspected to have criminally conspired with others now at large in attacking and terrorising the citizens of Darazo.

Among their operations was a coordinated attack on 24th of July, 2020 at about 0800hrs on the BSADP Darazo office where they killed one Babayo Hussaini 47yrs and one Chidawa Gyan-Gyan 48yrs both of Darazo L.G.A. Upon interrogation, the suspect voluntarily confessed to have committed the aforementioned offences.

During the arrest, there was a serious struggle where the suspect resisted arrest and fought the police team before he was taken down.

The following exhibits were found in his possession; One (1) locally made AK-49 riffle, Five (5) knives, a set of shin guard, One face mask, Three (3) handsets.

While thanking stakeholders for their various contributions towards this feat, we wish to reiterate that breakdown of law and order will never be tolerated by the Command.

The task has not been an easy one, but in line with our constitutional mandate, we shall remain fierce, tireless and relentless in committing ourselves towards the safety and security of lives and property.