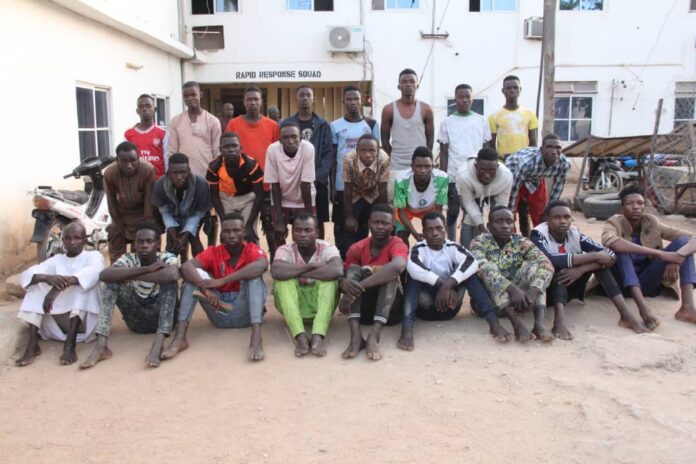 On 27th January 2021 at about 0300hrs following an intelligence report, Police operatives attached to the Rapid Response Squad (RRS), coordinated by the RRS Commander raided criminal hideout and black spots in Bauchi metropolis which resulted to the arrest of twenty three (23) suspects notorious for terrorizing Kofar wambai, Abujan Kwata and other vulnerable places within the city.

Prior to their arrest, they have been engaged in perpetrating heinous crimes against the peace loving people of Bauchi State and their acts include aggravated form of theft that involves the use of lethal weapons to perpetrate violence against victims and deprive them of valuables which include but not limited to mobile phones and cash. Sometimes, they brutally stab their victims, leaving them in a pool of blood that may lead to further unfortunate situations including possible loss of lives.

The suspects were apprehended with the following Exhibits;

In a similar note, On the 17/01/2021 at about 2030hrs, Police Patrol team attached to ‘D’ Division while on visibility Patrol at Kimba Junction, arrested one tricycle (Keke Napep) and one haujoe motorcycle, with about four suspects who were in possession of arms (machetes) for which they could not give any tangible reason(s) for possessing it. These suspects are:

All the above mentioned cases have been transferred to State Criminal Investigation Department (SCID) for discreet investigation after which suspects will be charged to court for prosecution and possible conviction if found guilty.

We once again reiterate our unreserved commitment in raising policing standards by serving the people of Bauchi State deligently in line with our mandate of maintaining law and order.