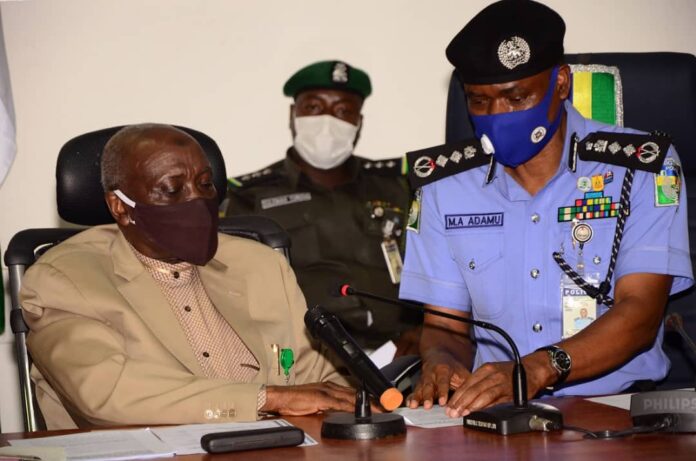 The Inspector-General of Police, IGP M.A Adamu, NPM, mni, has re-affirmed the commitment of the Force to enhancing internal discipline and professionalism among its workforce, noting that personnel discipline and professionalism are key to national security. The IGP made this known, today 23rd February, 2021 at the Force Headquarters, Abuja during the opening of a one-day Retreat organized by the Force in collaboration with the Police Service Commission (PSC), for Members of the Police Management Team.

The retreat, the IGP further noted, provided an ample opportunity for the Leadership of the Force to, amongst other things, engage and strengthen the bond between the Nigeria Police and the Police Service Commission as part of efforts directed at addressing complex interplays between Police personnel and the members of the public, and generally improve police service delivery in the country.  The IGP also noted that a resilient Police Institution and a strong Police Service Commission, bonded together by the overriding interest of our internal security, will evolve from the Retreat.

In his remarks, the Honourable Chairman of the Police Service Commission, Alh. Musiliu A. K. Smith (IGP RTD), commended the IGP for organizing the Retreat which he believes would enable the PSC and the Police Leadership rub minds and chart new ways of moving the Police Institution forward. He noted that though the functions of the duo are distinct, they are closely related, hence, the need for maximum collaboration and symbolic kind of relationship that will ultimately lead to the success of both given mandates.

The Attorney General of the Federation and Honourable Minister of Justice, Abubakar Malami (SAN), who was at the Force Headquarters on a working visit during the Opening of the Retreat, gave his goodwill message at the program. He called for sustained and harmonious working relationship between the Nigeria Police and the Police Service Commission which he notes can translate to effective and beneficial outcomes. He assured that the Ministry of Justice is open to assist with any role that can help advance the efficient service delivery of the Police.