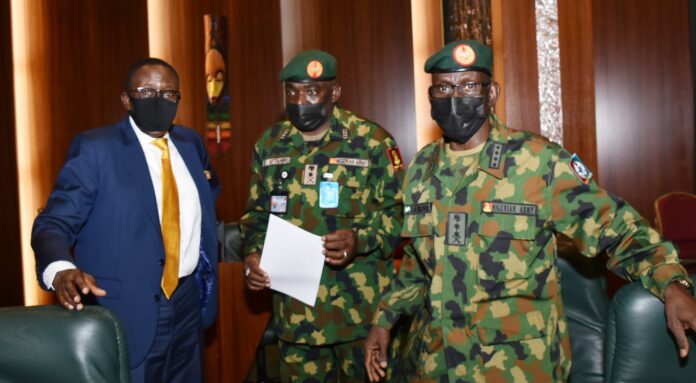 We Stand By Amadin Uyi!!

For asking very pertinent questions about the military’s expenditure of funds meant for executing the war against insurgency between 2015 and 2019, #NewsCentralTV’s Abuja Bureau Chief, #AmadinUyi, has been removed from the Department of Army Public Relations (DAPR) Whatsapp platform.

The platform on which information is shared regarding the Army’s activities to journalists, is operated by the DAPR Brigadier General Mohammed Yerima, assisted by spokespersons in the army divisions.

Amadin Uyi is an award-winning journalist, who has covered the Nigerian military and defence operations for close to a decade. He has an uncanny knack for investigative reportage and is not known for asking frivolous questions.

He had raised questions on the DAPR platform over statements made by the Chief of Army Staff, Lt. Gen. Ibrahim Attahiru at a press conference, and even volunteered sending a reportorial crew to get the COAS’s reaction.

The enquiries by Uyi bordered on the Army Chief’s Promise to “work towards addressing logistics challenges”. The senior reporter requested an explanation of this statement, considering that about 2.6 trillion Naira had been spent between 2015 and 2019.

With such a huge amount expended within the period, #AmadinUyi also questioned the COAS’s remark that directives had been given for “more weapons to be procured”, when the initially disbursed funds could have purchased enough armaments.

Because the public will want details, Uyi also asked if the army had previously abandoned the damaged and unserviceable equipment in the theatre of war, after the COAS talked about back-loading them and instructing that they be repaired immediately.

Rather than address these concerns to satisfy public curiosity and accountability, the Nigerian Army Public Relations Unit simply took #AmadinUyi off the platform after challenging him for asking what they described as “irrelevant questions”.

We also request for the sake of its credibility, that the Nigerian Army address these questions raised by our correspondent, #AmadinUyi, who has conducted himself with the utmost professionalism since this went down.