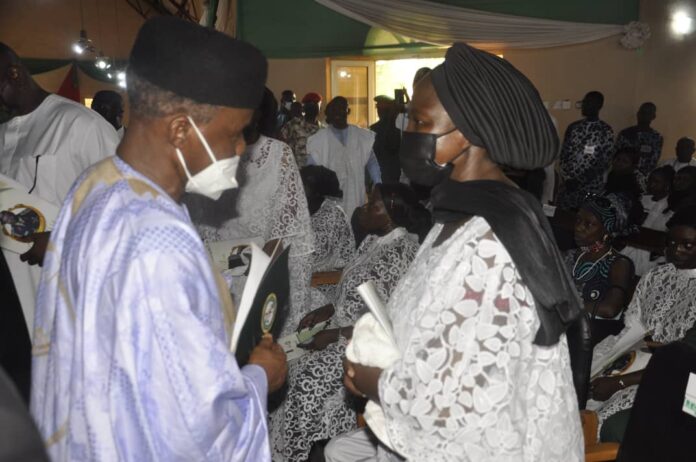 ….He is one of the most respected, dedicated and successful battle commanders to have emerged from the Nigerian Army – President Muhammadu Buhari

The remains of Late Lt Gen Joshua Nimyel Dogonyaro who passed unto glory on 13 May 21 at Jos at the age of 80 was laid to rest at on Friday 4 June 21 after a well attended funeral service held at the COCIN Church in his hometown Pajat, Langtang North LGA of Plateau State.

In his message at the service, President Muhammadu Buhari noted that the passing of Lt Gen Dogonyaro was a sad moment for the AFN and the nation.

The president represented by the HMOD remarked that Late General is one of the most respected, dedicated and successful battle commanders to have emerged from the Nigerian Army.

The president described Gen Dogonyaro as a thorough bred professional soldier who distinguished himself in the course of his military career.

The President’s message read in part:
“…..Lt Gen Dogonyaro was an icon of professionalism, bravery and discipline as aptly demonstrated in the attributes he displayed throughout his national and international military engagements. He will be fondly remembered for his exceptional qualities and commitment as a military officer and his numerous landmark contribution to the unity and development of Nigeria for years to come”

The internment of the Late General was held at his family compound in Langtang with full military honours. The ceremony was attended by Federal Government delegation led by the HMOD, Rt Hon Simon Bako Lalong, the Executive Governor of Plateau State, Representative of the CDS, RAdm JK Luka, Representative of the COAS, Brig Gen BA Muhammad, serving and retired senior military officers and several dignitaries.