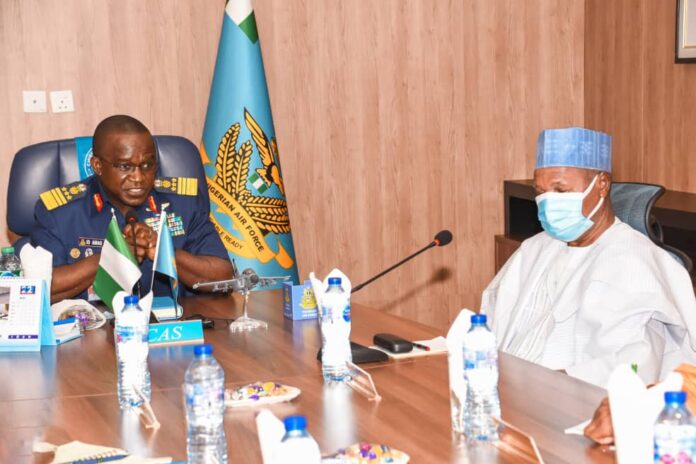 Gov Masari Reacts to NAF’s Responsiveness against Banditry in Katsina

The Executive Governor of Katsina State, His Excellency, Rt Hon Aminu Bello Masari, has commended the Nigerian Air Force (NAF) for its responsiveness in the fight against armed banditry and other forms of criminality in Katsina State and other states in Northwest Nigeria. He also noted that the glaring commitment and dedication of the Chief of Air Staff (CAS), Air Marshal Oladayo Amao, as well as the efforts of NAF personnel at the forefront of on-going operations in the Northeast has significantly curtailed the activities of the bandits and limited their scope of operation. Governor Aminu Masari disclosed this today, 18 June 2021, when he paid a courtesy call on the CAS at NAF Headquarters, Abuja.

Speaking further, the Governor stated that banditry in Katsina State and environs was peculiar as it does not represent any ideology, doctrine, religion or political party. According to him, ‘Banditry in Katsina is pure criminality’. He also revealed that the Katsina State Government have made several efforts to engage the bandits, but the moves have yielded little or no result as each group operates independently. The security situation, according to Governor, was compounded by the vastness of the Katsina open border with Niger Republic as well as the huge ungovernable spaces in the State which gives the bandits freedom of movement. He expressed sadness that the activities of these miscreants which was associated with wanton destruction of lives and properties, kidnapping, rape and arson has greatly affected the progress of the State. Even more worrisome, according to the Governor, was the sad fact that these bandits attack the same locality they reside in and people they have lived with for years. While noting that the primacy of governance can only be felt when peace and security is achieved, Governor Masari stated that all efforts must be made to root out banditry to restore sanity and normalcy in the entire North-western Nigeria. He expressed happiness with the level of synergy among the various security agencies and stated that the result of the new level of cooperation has started yielding the requisite outcome with some level of normalcy being felt in some areas of the State. He therefore called on the collective support of Nigerians as the military work round the clock to ensure the protection of lives and properties.

Responding, the CAS thanked Governor Masari for his support to the NAF and other security agencies in Katsina State. He also informed the Governor of NAF’s firm support for the Governor’s stance of not negotiating with bandits, while assuring him that in no distant time, the security situation would take a turn for the better. Air Marshal Oladayo also used the opportunity of the visit to inform the Governor that the mandate given the service chiefs by President Muhammadu Buhari was clear and unambiguous: Deal decisively with all bandits and other criminal elements in the country. According to the CAS, ‘With the induction of new platforms including the Super Tucanos and other platforms in the next month or 2, there will be no hiding place for these bandits.’ On ongoing NAF operational projects in Katsina State, Air Marshal Amao assured Governor Masari that when completed, the projects would enhance the operational capabilities and reach of NAF platforms in the State.

Highlight of the visit included the laying of wreath at the NAF Memorial Arcade in respect of NAF personnel who had paid the supreme price in the course of duty. The visit was witnessed by Branch Heads from headquarters NAF and some members of Katsina State Executive Council.