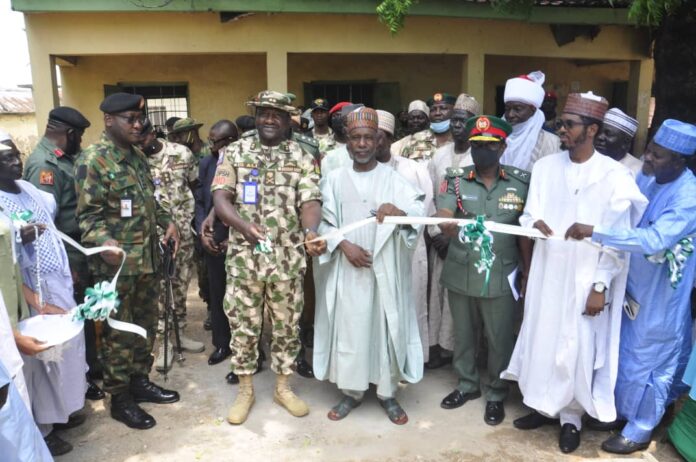 The Chief of Army Staff Lt Gen Farouk Yahaya today 5 Jul 21 commissioned a block of 6 classrooms at Kobi Primary School, Bauchi. Speaking during the commissioning ceremony, the COAS noted that under his leadership the Nigerian Army has paid close attention to the non-kinetic aspect of military operations by ensuring a good and cordial relationship with the civil populace and host communities where the military operates.

The COAS who spoke through the General Officer Commanding 3 Division/ Commander Operation SAFE HAVEN, Maj Gen Ibrahim Sallau Ali remarked that, the renovation of the school was a symbol of the friendship of the Nigerian Army. The COAS expressed optimism that the project would alleviate the infrastructure deficit in the educational sector in Bauchi state and complement the efforts of the federal, state and local government in improving education in the long run. “Let this project foster the desired peace, progress and indeed bring prosperity to the community” the COAS added.

The Executive Governor of Bauchi State Senator Bala Abdulkadir Mohammed represented by the Executive Chairman, State Universal Education Board, Sheik Abubakar Surunbai Dahiru Bauchi appreciated the COAS and the Nigerian Army for the gesture. He assured of their commitment to maintain the facility and put it to good use.

Also speaking at the event, Maj Gen GS Abdullahi who attended the primary school, appreciated the COAS for the gesture. He prayed God to guide the COAS and grant him success.
……..

On GOC 3 Division of Nigerian Army

Headquarters 3 Division Nigerian Army notes with concern a campaign a calumny against the person of Major General Ibrahim Sallau Ali, the General Officer Commanding (GOC) 3 Division Nigerian Army/Commander Operation SAFE HAVEN. The posts claimed that the GOC is from Miango community hence he is supporting the Fulanis against the Irigwes among other wild and unsubstantiated allegations.

Ordinarily, one should not bother responding to such malicious posts by faceless writers because of its manifest twisting of facts for selfish gains. However, as a professional soldier and a detribalised Nigerian who is passionate about the restoration of sustainable peace in Plateau state and beyond, the record would be put straight.

Maj Gen Ibrahim Ali attended several military courses and served in different theatres of operation within and outside the country. The GOC survived gunshot wounds sustained in 2 separate operations in the past. He succeeded Brigadier General BA Muhammad as the 41st GOC 3 Division Nigerian Army and Major General DC Onyemulu as Commander Operation SAFE HAVEN on 12 and 13 July respectively.

Such a General that is lucky to be alive today certainly knows and appreciates the value of peace in any part of the country.

I therefore, urge the public to discountenance the smear campaign designed to distract the GOC and our gallant troops from discharging their legitimate duties of maintaining peace on the Plateau.
We also urge all law abiding citizens to cooperate with security agencies by providing credible information that would help to curb criminality in the state.