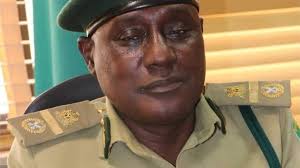 The Controller-General of Corrections, Haliru Nababa, on Wednesday, distributed dozens of aftercare materials to a cross section of discharged inmates.

Various formations of the Nigerian Correctional Service (NCoS) also received assorted drugs, during the event held at the Corrections’ national headquarters, in Abuja.

Performing the symbolic presentation of the start-up materials and tools to ex-offenders, Nababa explained that the after-care Scheme enjoys a premium attention from the Service.

“This is so, for the singular reason that it is key to the realization of one of our core mandates which is the reformation, rehabilitation and subsequent re-integration of inmates back to the society,” he said.

According to the Corrections CG, several workshops have been built; those moribund resuscitated; Farm Centres supplied with tractors and other sophisticated Agric Machinery; and the establishment of 3 Modern Bakeries at Oko Custodial Centre in Benin, as well as Dukpa and Kujama Farm Centres in FCT and Kaduna, a bid to revamp vocational skill acquisition across NCoS’ Custodial Facilities.

He promised to vigorously sustain the trend through value addition and continued collaboration with relevant stakeholders to churn out viable training regimes for inmates in education, agriculture and sundry vocations.

CG Nababa, assured that he will follow through the Public Private Partnership (PPP) arrangement for the NCoS Shoe and Garment Factory in Aba Custodial Centre and Leather Factory in Kano Custodial Centre, to further strengthen the capacity of the Correctional Service in preparing inmates for better life after serving their various sentences.

He called on the beneficiaries to justify governments huge investments in providing the (distributed) tools by working hard and being worthy ambassadors of the NCoS, never returning to the way of crime.