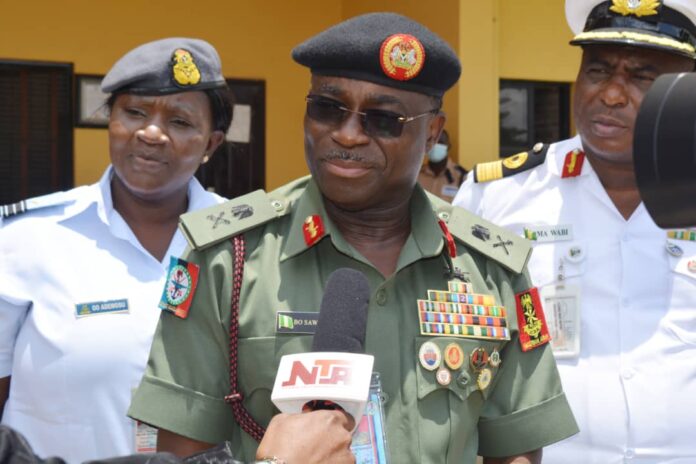 The Defence Spokesperson, Major General Benjamin Olufemi Sawyerr has assured Nigerians that the Armed Forces of Nigeria (AFN) under the current leadership of the Chief of Defence Staff General Lucky Irabor is committed to national security and peaceful coexistence among citizens and would do everything within it’s  Constitutional mandate  to uphold the unity, faith and progress of the country.

Maj Gen Sawyerr gave the assurance while visiting the Nigerian Television Authority (NTA), Channels TV and News Agency of Nigeria (NAN), in continuation of his familiarisation tour to media outfits in Abuja.

He said that AFN personnel under the current leadership are committed to the peaceful cohabitation of Nigerians and would guide against disintegration and collapse of the nation. According to the Director Defence Information (DDI), “the Armed Forces of Nigeria is the institution that holds the country together, anywhere you see a failed state, it is because the armed forces has collapsed,” he stressed.

He identified prompt dissemination of public information which he said must be credible, fair, balance and devoid of bias, while further reiterating the roles of the media as the watch dog of the society.

He appealed to the media to propagate news that seeks to promote peace, which is a necessary requirement for unity and tranquility.

The DDI equally enjoined the media to use their wider coverage to correct the negative impression of the AFN.

In his response, the Director General, NTA, Mallam Yakubu Ibn Mohammed reiterated the importance of information management and dissemination of information most especially at this period when the nation is faced with the fight against insurgency, banditry, kidnapping and other vices.

He called on media practitioners to ensure that they manage information by taking cognizance of the Nation’s interest. In his words “the media need to manage information, knowing what to say, how to say it and when to say it, is very critical at this unusual time, which require unusual method,” the DG added.

DG NTA further enjoined media organizations to ensure as much as possible that their news contents does not compromise  national security.

Chairman Channels TV, who was represented by the Company’s Secretary, Mrs Adeola Olumeyan, pledged that Channels TV  sustain it’s  partnership with the AFN, specifically in the area of dissemination of vital security information geared towards promoting national peace.

The Chairman expressed gratitude to the Defence Spokesperson for recognizing the need to collaborate with the media organizations, Channels TV in particular.

Likewise the Managing Director, NAN, Mr Buki Ponle commended the AFN for safeguarding the corporate coexistence of the nation. He appeal to media executives to be patriotic in their reportage by supporting the military efforts towards the restoration of peace and normalcy across the various theatres of operations.

According to him, “Nigeria may be passing through this rumble, I believe the Nation will overcome and the country will emerge better and stronger because we have a strong armed forces,” he maintained.