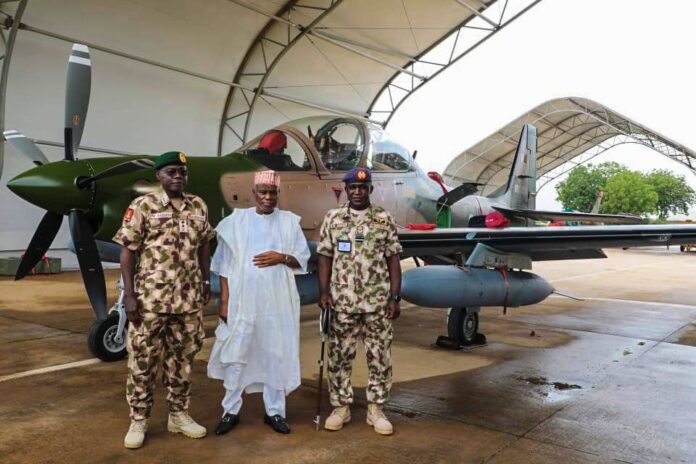 While Alpha Jets and Fighter Helicopters sustain attacks on locations of bandits in Zamfara and Kaduna States in the ongoing military operations, the recently Inducted Super Tucano Aircraft are being test run by the Nigerian Airforce (NAF).

The Minister of Defence, retired General Bashir Magashi made the disclosure to journalists after a three-hour security meeting President Muhammadu Buhari held with Security Service Chiefs at the Presidential Villa in Abuja.

According to Magashi, an additional batch of A-29 Super Tucano Jets would arrive in the country next week while the jets in the first batch already delivered were being test run.

The Minister said that the security meeting with the president reviewed the situation in the country and concluded that it could resolve the security challenges, especially in Zamfara State and the North Central, which was of huge concern at the meeting, but with the cooperation of Nigerians.

The security meeting was chaired by the President while the Chief of Defence Staff, CDS, General Lucky Irabor, and other security chiefs briefed the President on recent developments associated with the security challenges facing the nation.

The induction ceremony of U.S. the A-29 Super Tucano jets was hosted on August 31, 2021 in Abuja in the presence of senior military officers from the United States of America.

The induction ceremony symbolized the strength of unique partnership between Nigeria and America and underscores the value of training and working together. The Super Tucanos are the impetus for significant deepening of training and professional relationships.

The total sale is valued at almost $500 million, making it the largest FMS program in sub-Saharan Africa.

A total of 64 pilots and maintainers from the Nigerian Air Force trained to U.S. standards with the U.S. Air Force’s 81st Fighter Squadron at Moody Air Base in Georgia, USA.

As part of the program, the U.S. Army Corps of Engineers is providing $36.1M in infrastructure support to the A-29s’ home base, Kainji Air Base, including earth-covered magazines and aircraft sunshades, a new airfield hot cargo pad, perimeter and security fencing, airfield lights, and various airfield apron, parking, hangar, and entry control point enhancements.

The infrastructure package also includes a flight annex wing building for simulator training as well as munitions assembly and storage and small arms storage. USACE has also stationed a project engineer at Kainji to provide ongoing maintenance and assistance.