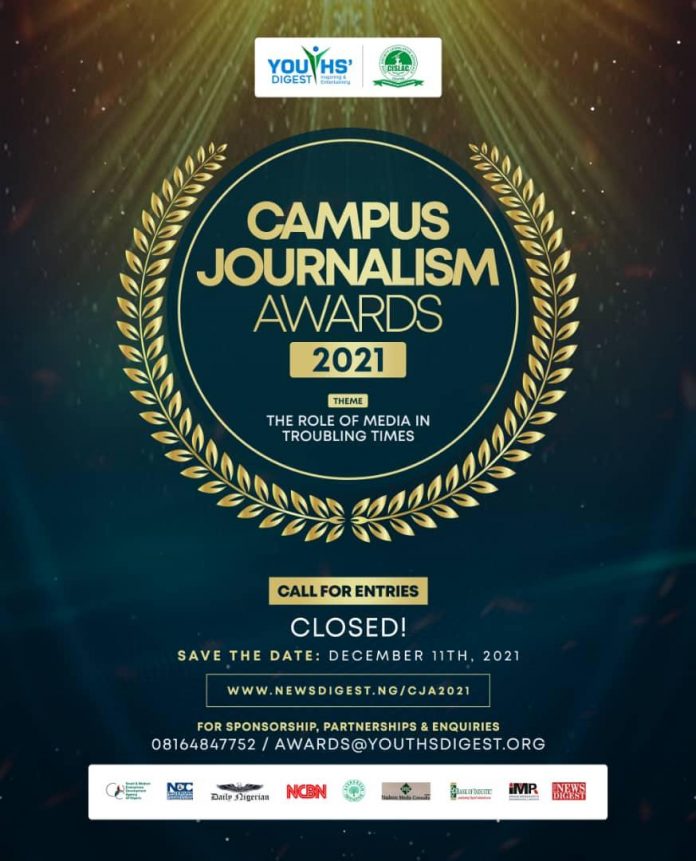 The organisers of the Youths Digest Campus Journalism Awards (CJA) say they have received over 300 entries for the 2021 edition of the award.

The Editor, Youths Digest Magazine, Gidado Yushau Shuaib, who disclosed this in a statement, said this year’s edition attracted a large number of entries jostling for the 15 categories of the award.

“As at Wednesday evening, we have received no fewer than 304 entries across the states of the federation,” Mr Shuaib disclosed.

The organiser added that the Broadcaster category will be named after the late Managing Director of Nigerian Customs Broadcasting Network, Mr Edirin Jerry Wesley, “whose tremendous support for campus journalism would never be forgotten”.

According to him, Edirin Jerry-Wesley Best Student in Broadcasting Award is aimed at immortalising the late NCBN boss who he said was keen about the development of the country’s media industry.

“The Screening Committee headed by award-winning young journalist, Alfred Olufemi is currently working to shortlist 30 finalists for the awards.

According to Shuaib, the screening committee was set up in a bid to promote transparency in the process of honouring outstanding student journalists.

The finalists will be announced via a broadcast on all Youths Digest social media pages as well as on its sister platform www.NewsDigest.ng at 7pm on November 10th, 2021.

“We are honoured to showcase and celebrate outstanding campus journalists each year on the platform of the CJA.

“In the past four years, we have remained steadfast in our commitment to nurture and showcase young talents from across the country,” the statement added.

The theme for the 2021 CJA is “The Role of Media in Troubling Times”.