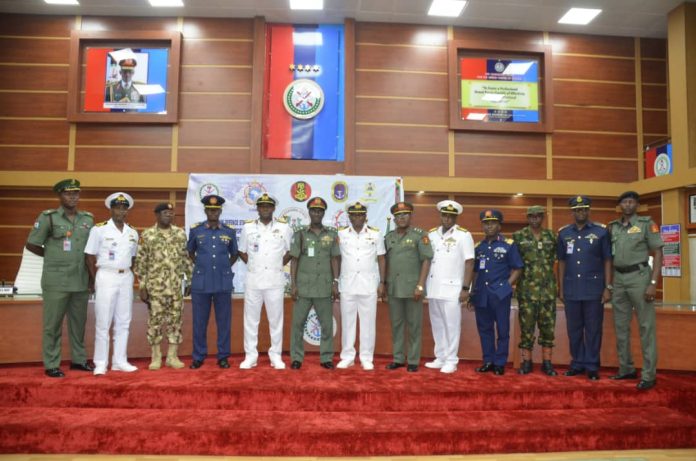 Many will think it is only by formulating efficient administrative policies and designing strategic capacity-building programmes. But there are other ways, perhaps, to foster a professional Armed Forces of Nigeria, AFN, in line with the yearning and aspiration of General Lucky Irabor.

Irabor, the Chief of Defence Staff, CDS’ fervent yearning and burning aspiration is to have a Nigerian armed forces capable of effectively meeting its constitutional imperatives. Irabor, apparently may have since designed policy guidelines, reform initiatives and measures towards achieving his lofty goal, having been in office for almost nine months.

Yet, the maiden ‘Sahel Military Games’ is one that he strongly believes will add an impetus to his over-aching target. The Sahel Military Games is strictly for members of the armed forces of the Sahel Region. The maiden edition of the extravaganza took place from 9 to 19 October 2021, in Abuja.

The aim of the games was to promote peace and togetherness among the following participating Africa countries, including Nigeria, Mali, Burkina Faso, Niger, Chad, Cameroun and Benin Republic. Laurels won during the championship were in the game of football, marathon race, amongst others.

Prior to the maiden edition of the military games last month, the Organization of Military Sports in Africa (OSMA), had appointed Gen. Irabor, as its Grand Patron. During a courtesy visit to the Defence Headquarters, DHQ, in Abuja, by the leadership of the organisation, in June this year, Brigadier General Maikano Abdullahi, OSMA President, also named the CDS as ‘Chief Host’ of the Sahel Military Games.

Gen Irabor, in his remarks then, appreciated the leadership of the apex military sporting body in Africa for his conferment as the Grand Patron of CISM, OSMA and the Chief Host of Sahel Military Games.

The CDS had also stated that he is in full support of hosting the forthcoming Sahel games, under the auspices of OSMA, stating that the sporting festival would surely contribute significantly in assisting the Armed Forces in realization of the political mandate of maintaining peace and harmony in order to allow social economic activities to strive in Africa.

According to him, sports remain a veritable instrument for not just friendship and diplomacy, but equally for promotion of global peace and conflict resolutions.

The Defence Chief, maintained that members of the armed forces remain tools for policy implementation in the actualization of peace and stability in trouble spots both in the Africa Sub-region in particular and the world in general.

The CDS, who thanked the various sponsors, assured the organization of his commitment in providing right ambience towards the successful hosting of the sahel games, noting that he looked forward to a more engaging time during the sporting competition.

Brig. Gen. Abdullahi, while speaking then, noted that the investiture honour on the CDS was in recognition of his support towards the Association since he took-over the mantle of leadership as the head of the Armed Forces of Nigeria. He added that CDS has remained a source of aspiration and encouragement to OSMA.

According to the OSMA President, fourteen (14) African countries were expected to participate in the competition which is dubbed “Sporting for Peace and Solidarity.” The countries are Nigeria, Mali, Burkina Faso, Niger, Chad, Libya, Benin Republic, Cameroun, Tanzania, Kenya, Congo Brazzaville, Congo Kinshasa and Morocco.

Maikano, had also described the games as a platform for promoting unity, cooperation and understanding among the Sahel nations.He said OSMA is using sports as a non-kinetic means of solving conflict and maintaining peace and solidarity in the Sahel Region.

He equally disclosed that a total of 327 delegates, comprising of sportsmen and women who would compete for medals in marathon race, football and golf, while trophies will be presented to the participating countries.

He further disclosed that adequate logistics and modalities have been put in place for a successful tournament.

Prominent guests and stakeholders at the recently-concluded military games believe, like Irabor, that sporting events are avenues to develop the capacity of the armed forces of sahel countries, in particular, to tackle violent crimes which have stunted the development and growth of the region.

Dr. Ogbonnaya Onu, had while declaring open the first edition of the Chief of Defence Staff Organization of Military Sports in Africa (OSMA) Sahel Countries Military Games, called on African countries to work together in securing the continent.

Onu, Minister of Science Technology and Innovation, lamented that the continent is bedeviled by myriad of security challenges.

He however, commended the OSMA leadership for organising the sporting events, noting that the assembling of soldiers from different parts of the continent would awaken the spirit of comradeship and friendship in the Sahel region in particular and Africa in general.

According to him, the games will also inculcate core values of integrity, excellence, and service delivery among the participating militaries.

The Minister further hailed the leadership of the Nigerian armed forces, led by Gen. Irabor, for demonstrating professionalism, discipline, loyalty and dedication in the performance of their duties, saluting the gallantry and bravery of officers and men of the Nigerian military in surmounting the security challenges.

With the flurry of genuine commendations like that of Dr. Onu coming the way of the CDS, who says Irabor will not continue to harness the potentials in sports to actualize his dream of having a Nigerian armed forces capable of effectively meeting its constitutional imperatives. Who said so?