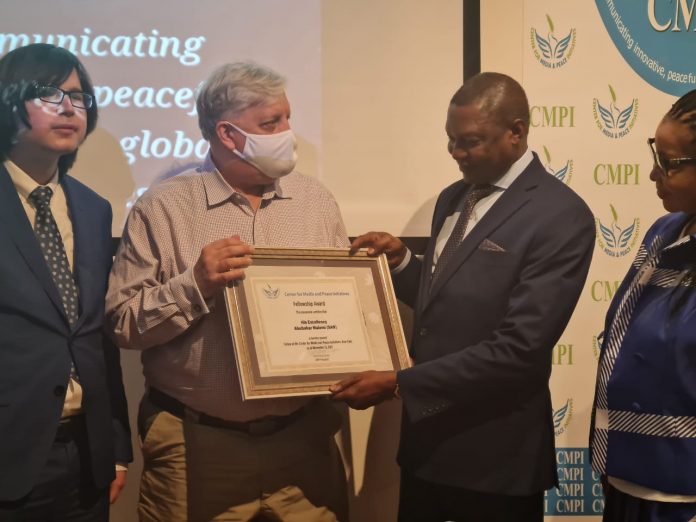 Nigeria’s Anti-Corruption Crusade: Template for Africa – Malami
Outstanding successes recorded by Nigeria’s President Muhammadu Buhari in international asset recovery could be a template for other African countries in the fight against corruption.
Attorney General of the Federation and Minister of Justice, Abubakar Malami, SAN made the statement on Monday while presenting the 2021 annual public lecture in New York organized by the Centre for Media and Peace Initiative, New York, United States of America.
This is made known by Dr. Umar Jibrilu Gwandu, Special Assistant on Media and Public Relations, Office of the Attorney General of the Federation and Minister of Justice in a statement issued to newsmen.
Malami said being an Africa Union Champion in the fight against corruption, President Muhammadu Buhari, has endeavored under his leadership to fight corruption in all its ramified manifestations through legislative framework, institutional infrastructure, the adoption of effective preventive measures against corruption and putting in place mechanisms for management of recovered stolen assets.
“Various steps have been taken in terms of legislatives frameworks, establishment of institutions and policy measures targeted at combatting corruption, regional corporation and ensuring good governance for the benefit of citizens”, Malami said.
“In 2017, the signing of a trilateral Agreement with Switzerland and World Bank enabled the recovery of $322.515million.
“In 2020 a total sum of $311.7million was returned to Nigeria after signing another trilateral agreement with the U.S.A and Bailiwick of Jersey.
“Also in the year 2020, 5.4million Euros was recovered in March emanating from an agreement signed with Northern Island. The Federal Government was able to recover from UK the sum of €4,214,017.66 connected to the family of James Ibori.
“Additional recoveries to the tune of $200million are being anticipated subject to the settlement of litigations of which the Ministry of Justice is attending to presently”, he said.
According to Malami, the present administration was able to achieve the successes due to the political will, funding, legislations, institutional support, and Executive Orders by President Muhammadu Buhari.
“The Buhari’s approach to fight against corruption has been one of three cardinal pillars of our campaign promises, the others are economic and security development”.
He added that Nigeria has taken anti-corruption measures in tackling cybercrime, money laundering, oil bunkering and false assets declaration among others.
The Attorney General of the Federation noted that the Federal Government has developed the National Anti-Corruption Strategy and a guideline for smooth implementation of the strategy which has five pillars; prevention of corruption, public engagement, ethical re-orientation, enforcement and sanction, and recovery and management of proceeds of crime.
“I am pleased to inform this gathering that the Federal Government of Nigeria has recovered funds from corporate bodies and individuals through the combined efforts of the Office of the Attorney General of the Federation and Minister of Justice and our Law Enforcement Agencies through local and international collaboration with international community and adoption of strategies put in place”.
He said former state Governors, Senators, Ministers including some members of the ruling All Progressive Congress (APC) were not spared in the fight against corruption.
“Currently, high profile personalities including judicial officers and former governors indicted for corruption have been or are being prosecuted. We have some former top government officials convicted and serving various jail terms for corruption related crimes while in office,” he said.
Malami noted that Nigeria’s stand in the anti-corruption struggle has been adjudged to be recording tremendous success, noting that the position was upheld by credible International organizations including the United Nations Office of Drugs and Crimes (UNODC).
Malami said the consequential effects of the approach of President Muhammadu Buhari administration in the fight against corruption is reflective in UNODC 2019 corruption survey report titled; CORRUPTION IN NIGERIA: PATTERNS AND TRENDS.
He said the report alluded to a decrease in bribery which is the bedrock of corruption. It also established Nigeria’s leadership in the fight against corruption and its testimony to the seriousness of purpose of the Government’s anti-corruption agenda.
Let me quote the UNODC 2019 report: “the efforts made to prevent and counter corruption in its various manifestations have earned Mr. President the role of the African Union’s Anti-Corruption Champion. This survey is yet another example of Nigeria’s leadership in the fight against corruption and is testimony to the seriousness of purpose of the Government’s anti-corruption agenda”.
Malami therefore called Africans in both public and private sectors to aspire from this source of inspiration and understand that integrity pays above acquiring illegal monies from corrupt practices.
“I hereby reiterate Nigeria’s call for strong institutionalized body that could join forces together with African countries to fight corruption. Collaboration in support for institutions, development of international and regional strategies and guidelines will go a long way in addressing the menace of corruption,” he said.
*Dr. Umar Jibrilu Gwandu*
(Special Assistant on Media and Public Relations,
Office of the Attorney General of the Federation and Minister of Justice)