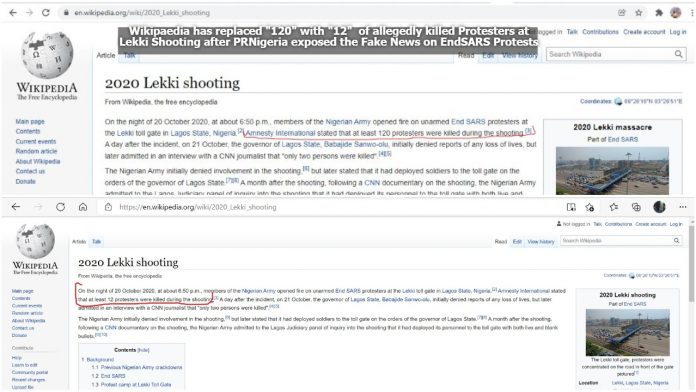 Barely two hours after PRNigeria exposed the fake report in the claim by the Wikipedia Free Encyclopedia that 120 unarmed protesters were killed by the Nigerian Army at the Lekki Toll Plaza last year, the website has now reduced the casualty figure to 12.

PRNigeria had earlier on Wednesday reported that Wikipedia was still claiming that 120 civilians died at Lekki on October 20, 2020 despite overwhelming evidence to the contrary.

While Wikipedia relied on a press statement by Amnesty International for the fictitious figure, PRNigeria disclosed that the human rights organisation only mentioned 12 persons allegedly killed in Lekki and Alausa in Lagos State.

To make matters worse for Fake news peddlers, the Lagos state Government has rejected the unproven claim that 9 persons died, adding that only one person died of gunshot injury in Lekki on that night.

Wikipedia had kept the false casualty figure of 120 on its website for 13 months only to replace it with 12 two hours after PRNigeria exposed the contradiction.

Below is the original story

The Wikipedia Free Encyclopedia has joined the long list of global victims of the vicious propaganda surrounding the EndSARS movement and the phantom Lekki Massacre.

The Internet-based encyclopaedia medium was caught quoting 120 casualty figures for the Lekki Massacre that never took place and attributing such falsehood to Amnesty International (AI).

Despite recent developments like the Lagos state Government White Paper on the Panel Report which confirmed unequivocally that there was no such thing as the massacre at Lekki, Wikipedia has continued to mislead the world that 120 unarmed civilians were killed on October 20, 2020, at Lekki Toll Plaza.

Despite overwhelming pieces of evidence to the contrary, the narrative of 120 massacred victims is still on the Wikipedia site, PRNigeria can authoritatively report as of December 1, 2021, on its website: https://en.wikipedia.org/wiki/2020_Lekki_shooting.

“On the night of 20 October 2020, at about 6:50 p.m., members of the Nigerian Army opened fire on unarmed EndSARS protesters at the Lekki toll gate in Lagos State, Nigeria. Amnesty International stated that at least 120 protesters were killed during the shooting,” the Website is claiming

Meanwhile, PRNigeria in its best-selling book, “101 Fake News on EndSARS”, reports that Amnesty International in its official press statement during the period only claimed that twelve persons were killed by men of the Nigerian army and police at two different locations during the EndSARS protests in Lagos.

The official statement from Amnesty International did not claim the 12 casualties were recorded at Lekki toll gate. It merely stated that: “The Nigerian Army and Police killed at least 12 peaceful protesters yesterday at two locations in Lagos… Lekki and Alausa”

Meanwhile, Wikipedia also provides disclaimers on some articles on its website which may contain significant factual inaccuracies, i.e. information that is verifiably wrong.

It states that: “Wikipedia is not a reliable source for citations … Because it can be edited by anyone at any time, any information it contains at a particular time could be a work in progress, or just plain wrong.

“Edits on Wikipedia that are in error may eventually be fixed. However, because Wikipedia is a volunteer-run project, it cannot constantly monitor every contribution. There are many errors that remain unnoticed for hours, days, weeks, months, or even years. Therefore, Wikipedia should not be considered a definitive source in and of itself.”

PRNigeria gathered that the contributors of the misleading information are Fake news peddlers whose contents have been exposed on various platforms through fact-checking systems.

Even the account of alleged “massacre” victims given by Justice Doris Okowubi (rtd) led Lagos State Panel on Restitution for Victims of EndSARS and other matters vary from that of Wikipedia – despite the panel’s reliance on the same platform for the definition of the term “massacre.”

On page 294 of the Panel Report, it concludes that what happened at the infamous Lekki Toll Gate incident could be likened to a “massacre” following which it gave Wikipedia’s definition that, “a massacre has been defined as the killing of multiple individuals, which is considered to be morally unacceptable especially when perpetrated by political actors against defenceless victims.”

However, while the panel attempted to rely on Wikipedia’s definition to contextualise the term massacre, it’s claims that at least nine persons were killed by security agents when they allegedly stormed the Lekki toll gate on October 20, 2020.

Controversy has continued to trail the leaked unauthorised version of the report with so many inconsistencies and irreconcilable errors in the submission.

Meanwhile, Lagos State Government has rejected the report of the EndSARS Panel that there was a massacre in Lekki Toll Gate during the 2020 #EndSARS protest.

To the government, the panel failed to establish arbitrary and indiscriminate killing of protesters at the toll gate.

According to the 36-page White Paper released on November 30, 2021, the panel’s findings “are clearly and manifestly not supported by the evidence before the JPI as attested to by the JPI itself, when it said there was no contrary evidence to that of Prof. Obafunwa that only one person died at Lekki Toll Gate of gunshot wounds on 21st October 2020”.

Rejecting the recommendation, it said: “The state government is, therefore, unable to accept the finding that nine (9) people died of gunshot wounds at LTG on 20th October 2020.”

Recall that PRNigeria has reported that testimony by Dr. Babajide Lawson, a trauma and orthopaedic surgeon at Reddington Hospital, Lagos on the Lekki Incident as quoted in the Lagos State Judicial Panel of Inquiry report has been found to be altered in a re-presentation by the panel.

It also reported how the panel provided contradicting submissions on forensic testimony by the Lagos State Chief Pathologist, Prof John Oladapo Obafunwa, in its report.

PRNigeria also revealed that video footage from the alleged Lekki Toll Gate incident along with witness submissions from Sentinel Forensics Ltd, a Forensic expert engaged by the Lagos Judicial Panel of Inquiry did not prove allegations in support of alleged killings in the report.

Similarly, a United Kingdom-based medical forensics and ballistic expert Dieye Tonye Willie-Harry has berated both local and international media organizations for being unable to provide evidence to back up claims of massacre at the Lekki Toll Gate incidence.

Mr. Willie-Harry who is the Director of Oxygene Consulting UK Limited while testifying at the Justice Doris Okowubi (rtd) led Lagos State Panel of Inquiry on Restitution for Victims of SARS Related Abuses and Other Matters had on page 268 of the Panel report confirmed that contrary to widespread media coverage, all forensic investigations of media contents undertaken by his company did not prove direct shooting of unarmed civilians by the Nigerian Army.

1. Author of 101 Fake News on EndSARS, Other Expose Inconsistencies in Panel Report