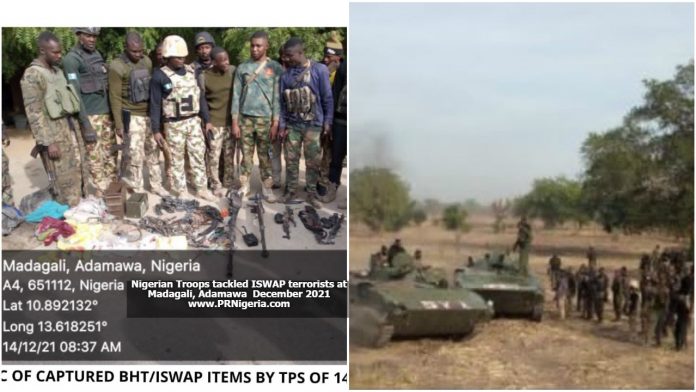 But a soldier sustained gunshot injury during the duel between troops and terrorists of the Islamic State of West Africa Province, ISWAP, it was learnt.

An intelligence officer of the military told PRNigeria that troops were swiftly mobilized after a signal was received that terrorists were attacking Sabon-gari town in Madagali, Adamawa State.

“The troops successfully pinned down the ISWAP elements with superior firepower until reinforcement from brigade headquarters arrived and engaged in a gun duel with the terrorist thereby forcing them to withdraw in disarray along Lemu axis.

“At least six terrorists were killed while gun trucks and sophisticated weapons were recovered.

“One soldier sustained an injury during the encounter. The troops further exploited up to 5km along the terrorists’ withdrawal routes but no further contact was made. Meanwhile, the general is safe is being closely monitored,” he said.

He said that the troops ambushed the terrorists killing six of them while several others escaped with fatal gunshot wounds in the encounter.

“The Boko Haram terrorists were forced to withdraw in disarray and run towards the axis of Lemu, while troops trailed the other fleeing terrorists and neutralise them,” he said.