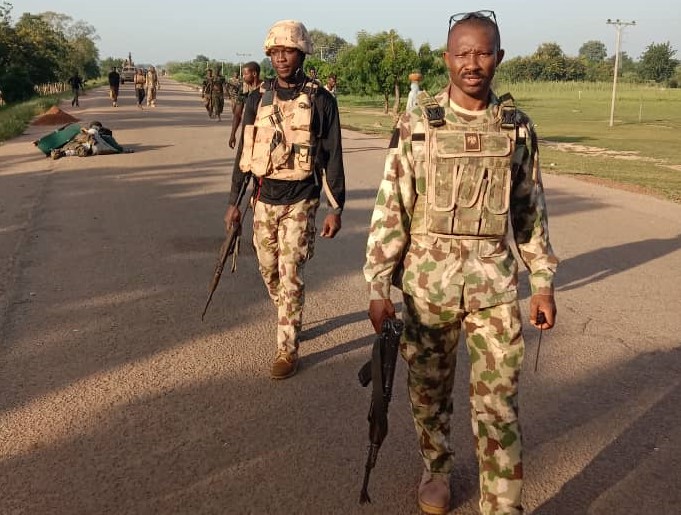 8. In Operation DELTA SAFE, troops sustained anti-illegal oil production operations and other non-kinetic operations to forestall activities of vandals and other economic saboteurs in the South – South Zone. Some of these operations were executed at different locations in villages, creeks and towns in Ikwere, Port Harcourt, Emouha, Ahoada East and Bonny LGAs of Rivers State. Other locations are villages, towns and creeks in; Warri South, Warri South-West and Burutu LGAs of Delta State as well as Ogbia and Yenagoa LGAs of Bayelsa State. Troops’ operations also yielded significant results at; Unholu and Uwaza communities’ areas in Ukwa West LGA of Abia State.
9. Consequently, in the last 2 weeks, troops discovered and immobilized a total of 14 illegal refining sites, 19 ovens, 13 cooking pots/boilers, 15 cooling systems, 15 reservoirs, 5 large dugout pits and 33 storage tanks in the Niger Delta Region. A total of 896,500 litres and 70 polythene bags of illegally refined Automotive Gas Oil were recovered in the process. Also, a total of 11,000 litres of illegally refined Dual Purpose Kerosene and 689,000 litres of stolen crude oil were recovered in the course of the operations. In addition, 28 pieces of galvanized pipes, 3 tanker trucks and 12 wooden boats used for illegal oil bunkering activities were recovered and handled appropriately in the course of the operations. All the arrested criminals and recovered items have been handed over to relevant security agencies for further action.
10. Troops have continued to maintain their operational tempos in all the theatres of operation to frustrate terrorists, bandits, economic saboteurs and other criminal elements across the Country. Also, the Air Components have continued to dominate all operation theatres with constant aerial patrols to forestall criminal activities across the Country.
11. Gleaning from the available information as I have just presented, there is no gain saying the efforts of the Armed Forces of Nigeria and other security agencies so far yielded appreciable results. Our operational performance for the year, as you may recall, is a show of our commitment, synergy and determination to lay down our lives to protect our great Nation. We will continue to sustain the offensive and will not relent until peace is restored to every troubled zone in Nigeria. The general public is also assured of our commitment to protect our economic assets anywhere.
12. 12. The High Command of the Nigerian Military wishes to thank the general public for their support and further solicit their cooperation towards providing credible and timely information that will facilitate proactive engagements in our operations. The Military High Command once again commends all the gallant troops and further encourages them to remain resolute and decisive in securing the Country. Once again, thank you members of the press for your understanding and support for our course.
13. 13. Thank you and God bless.
(Pictures of some incidents from the various operations carried out within the period under review are available for your necessary action).