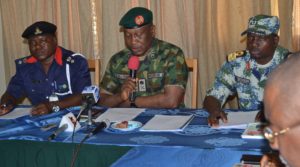 The Forum of Spokespersons of Security and Response Agencies (FOSSRA) has resolved to improve inter-agency collaboration towards efficiency in security operations and better information management in the country.
The Chairman of the Forum, who is also the Director Defence Information, Major General Chris Olukolade made the disclosure at the Palace of Oba of Lagos, Rilwan Akiolu when he led other members of the forum to the Palace after their monthly meeting and advocacy engagements in Lagos.

While appealing for the intervention of traditional rulers and religious leaders to support the ongoing war against criminality and terrorism in Nigeria, he warned parents and guardians to be watchful of their wards. He pointed out that “Most undesirable elements who perpetrate evils live among innocent citizens in the community. They should therefore be properly warned or be exposed to security agencies.”

Olukolade said “Formation of FOSSRA, which is under the auspices of the Office of the National Security Adviser (ONSA) has ensured better interaction with the media and other practitioners in information management, a development that has brought about mutual understanding.

“We now have better inter-agencies cooperation, greater improvement in civil-military relationships, which have contributed immensely in various operations to protect lives and property”.

In his remarks, the Oba of Lagos, Rilwan Akiolu urged security agencies to improve on the inter-agency collaboration and avoid frictions and misunderstanding to ensure synergy and focus in tackling terrorist activities in the country. He said the establishment of FOSSRA should nip in the bud the occasional inter-agency rivalry being witnessed among the security forces.

According to the monarch, national security is an issue that affects everyone and as such, all Nigerians must take it more seriously especially now that the country is facing challenges.

He commended the FOSSRA for its regular dissemination of information, urging it not to relent in its duty of keeping the citizenry updated on security and emergency situations.

“The forum has been doing well and I encourage it to keep the flag flying. On my part, I will ensure that I contribute my quota in making Nigeria a safer place.

“Being a former AIG (of Police) myself, I don’t joke with security matters. In fact, there are times I pick my phone and inform senior security officials of any useful intelligence at my disposal.

“We have nowhere to go, this is our country and we must all join hands to make it work irrespective of religion, ethnicity or political affiliation”, he added.