The Economic and Financial Crimes Commission EFCC has arraigned the trio of Haladu Ibrahim (Mai Anguwa), Sa’idu Balarabe Sulaiman and Baba Sale Sarkin Magina before Justice Tukur Mu’azu of Kaduna State High Court on  a 4- count charges bordering conspiracy, forgery and obtaining money by false pretence
The trio were alleged to have conspired among themselves to sell two plots of land behind the International Trade Fair Complex, Kaduna valued at N3, 000,000.00, using forged documents.
One of the charges read, “That you Haladu Ibrahim, Saidu Balarabe Sulaiman, Aisha Mohammed and Baba Sale Sarkin Magina sometime in 2011 within the Jurisdiction of the High Court of Kaduna State dishonestly used as genuine a certain document, to wit: Offer of Grant/Regrant of Statutory Right of Occupancy No. KDL/87365 which you knew to be a forged document and that you thereby committed an offence contrary to Section 366 of the Penal Code and punishable under Section 364 of the same Law”.
The accused persons pleaded not guilty to all the charges and were admitted to bail in the sum of one million naira each (N1m) and one surety in like sum. The sureties must not be less than a level 14 officer in the civil service and they are to deposit their International Passports with the court.
The case was adjoined to February 19, 2015 for trial.
Wilson Uwujaren
Head, Media & Publicity 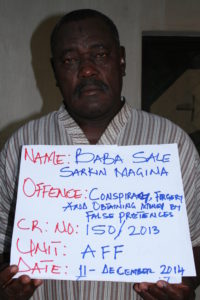 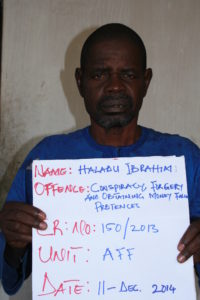