Military delegations of Nigeria and Chad today concluded their a Bilateral  meeting  to review the progress of the ongoing counter terrorism campaign being conducted in the Lake Chad Basin area.
The forum noted with satisfaction, the recent successes  in the various fronts of the operations and resolved on additional measures to  sustain the momentum of the campaign.
They also resolved to enhance established structures  for the coordination and logistics of the combined operations towards a speedy defeat of terror in the region.
The Bilateral forum where the Nigerian military  delegation led by Air Chief Marshal Alex Badeh  and the Chadian’s led by Major General Brahim Mahamat discussed details of the ongoing onslaught on terrorism  is a follow up to an earlier one held last month.  The two countries are currently involved along with others in military operations aimed at stamping out the activities of terrorists who have constituted a menace to security in the entire region.
CHRIS OLUKOLADEMajor GeneralDirector Defence InformationFebruary 6, 2015
PRNigeria encourages institutions to be transparent in their information management as it provides news items from authoritative sources for free use by the media 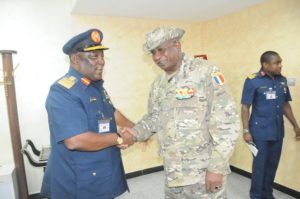 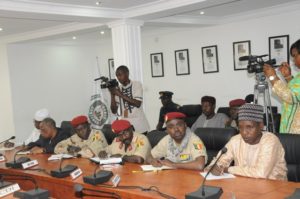