The Economic and Financial Crimes Commission, EFCC, has arraigned Adebola Asiwaju Oyewole, before Justice Lateef Lawal Akapo of the Lagos State High Court sitting in Ikeja, on a 21-count charge bordering on conspiracy, obtaining money by false pretence, forgery, impersonation and stealing.
Oyewole got into trouble owing to his alleged involvement in stocks and shares scam to the tune of N52,751,393.03 (Fifty Two Million, Seven Hundred and Fifty One Thousand, Three Hundred and Ninety Three Naira, Three Kobo). Operatives of the EFCC arrested Oyewole, following a complaint by Marina Securities Stock Broking Services, alleging that, the accused person impersonated one of its clients: Oladosu Olarere Sunday, by cloning his shares-bearing account and Central System Clearing Sytem numbers.
With the access, he allegedly executed transactions and disposed shares to the tune of N52,751,393.03 (Fifty Two Million, Seven Hundred and Fifty One Thousand, Three Hundred and Ninety Three Naira, Three Kobo) and converted  the proceeds to his personal use.
One of the charges against him,  read : “You Adebola Asiwaju Oyewole, (alias Oladosu Olarere Sunday;  Charles Oghene Jode; Oladosu Oladayo Simeon; Precious Abraham; Alhaji Razaki Atanda Serike; Chief Bolaji Carew;  Babajide Odunsi, Adewunmi  Tomori) between the 23rd day of July 2014 and September 2014 at Iyana Ipaja within the Ikeja Judicial Division, with intent to defraud obtained the sum of N40,915,098 (Forty Million, Nine Hundred and Fifteen Thousand, Ninety Eight Naira Only) from Marina Securities Stock Broking Services Limited, being payment of proceeds from the sale of 50,000 units of Zenith Bank shares of Mr Oladosu Olarere Sunday by falsely representing to Olubukola Modupe Lawal that you are Mr Oladosu Olarere Sunday which pretence you knew to be false and thereby committed and offence contrary to section 1(3) of the Advance Fee Fraud and Other Fraud Related Offences Act No: 11 of 2006”.
The accused person pleaded not guilty to all the charges after they were read to him.
EFCC’s counsel, I. O Daramola requested the court for a trial date in view of the plea of the accused person. However, defence counsel, C.U Ogungbowa informed the court that he had filed a bail application and requested that the accused be remand him in Kirikiri prison “because of his health condition”, pending hearing of the application.
Justice Akapo subsequently adjourned the case to March 23, 2015 for hearing of bail application and ordered that the accused person be remanded in Kirikiri  prison.
Wilson Uwuajren
Head, Media & Publicity 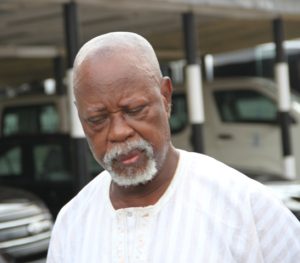