Home Security Finally Troops Rout Terrorists from Bama and Last Stronghold in Yobe
Troops this afternoon finally succeeded in routing terrorists from Bama in Borno state.  The mission which was accomplished with massive casualty inflicted on the terrorists before the remnant finally fled the town lasted days of careful manouvre and efforts to scale series of obstacles and land mines planted by terrorists who have occupied the town for months.  The Chadian partners in the Multinational Joint Task Force have been mandated to undertake a pursuit of the terrorists who are believed to be heading for the borders after being dislodged from Bama. Nigerian troops are continuing with cordon and search of the town and surrounding.  Arms and ammunition are being recovered as troops conduct aggressive patrol of the entire vicinity on the looking out for any terrorists who might be stranded or trying to operate elsewhere in the area. In a related development, Goniri, the last major stronghold of the terrorists operating in Yobe state was this morning taken over completely by troops after days of manouvre.  Cordon and search is continuing in and around Goniri town which is in same LGA with Buni Yadi where a bomb making facility was discovered in the course of cordon and search recently. This completes the clearing of Gujba Local Government Area (LGA), one of the two LGA occupied by the terrorists in Yobe state.  The other Local Government, Gulani, was finally cleared earlier in the month.  This makes Yobe the second to be successfully cleared among the three state slated for the mission to dislodge terrorists bases. The comprehensive offensive aimed at clearing the terrorists from all parts of the mission area is continuing with coordinated air strikes on identified terrorists hideouts and enclaves along with ground assaults.
Major General Chris OlukoladeDirector Defence Information 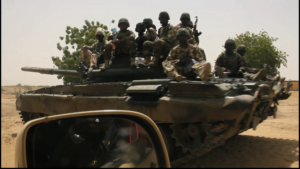