The 23 Armoured Brigade of the Nigerian Army based in Yola, Adamawa State, has handed over two hundred and seventy five(275)  rescued women and children from the insurgents in  Sambisa forest to the National Emergency Management Agency (NEMA) for rehabilitation.
The rescued women and children traumatized and malnourished by their ordeal were immediately taken to Malkohi IDP camp in Yola for profiling and were provided with food, mattresses, blankets, mosquito nets, soap and detergents.
Earlier, the Commander 23 Armoured Brigade, Col. Aba  Popoola, said ” on behalf  of the Nigerian Army I want to hand over 275 rescued women  and children that we rescued from Sambisa forest to the National Emergency Management Agency for care and welfare”.
Statistically, the rescued women and children comprised of 69 women, 14 girls, 26 male children aged 6-12years, 49 male children aged 5years, 48 female children aged 0-5years and 69 female aged 6-12years, while 21 injured people are on admission at the Federal Medical Centre, Yola.
Receiving the rescued people, the Director General of NEMA, Muhammad Sani Sidi,  who was represented by Director Search and Rescue, Air Commodore Charles Otegbade, said the rescued women and children need special attention and that the agency  had made all the necessary arrangements with relevant stakeholders for trauma counseling and other forms of assistance to enable them recover and return to normal life. 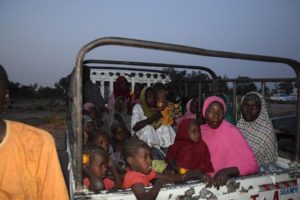