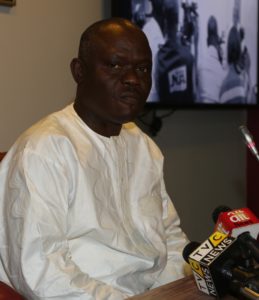 The Chief Security Officer (CSO) to former President Goodluck Jonathan, Mr. Gordon Obua this afternoon told Nigerians and the world at large that he is hale and hearty and is being treated with dignity by the management and staff of Department of State Security Services (DSS).

Obua, a serving officer of the DSS addressed the media inside the conference room of the service headquarters in Abuja.

There had been social media rumours that Obua, who had been detained since last week died after being tortured.

But the man who looked composed and well kept sad: ” I thanked Nigerians and members of my family who have expressed very serious concern about my well being in the last six days.

“I want to use this medium to tell Nigerians and members of my family that I am hale and hearty.

” As a serving officer of DSS and having completed my duty tour with the last President, the service felt that I should give a briefing of my stewardship.

“Nigerians should should be assumed that DSS is a responsible organisation and I am sure that nothing adverse will happen to me once it is ascertained that I did nothing wrong”, Obua stated.

When pressmen attempted to question him, Obua clarified “I am a serving staff of DSS and I have limitations regarding speaking with the press. I thank the Director General of DSS for the way that I have been treated so far.”