As a result of ongoing operations  under the aegis of OPERATION LAFIYA DOLE to clear Dikwa and its environs from Boko Haram Terrorist, the troops of 7 Division Nigerian Army yesterday rescued 30 persons from the hands of the terrorist in KWAYABE and WUFE wards in DIKWA LGA of Borno state.
They include 21 children and  a six-day old infant, seven women including three nursing mothers and two elderly male adults.
The Nigerian troops also discovered a training shed inside the vandalised and looted Palace of the Shehu of Dikwa where weapon handling and engagement of Aircraft were being taught to new Boko Haram terrorists recruits. 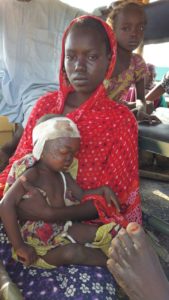