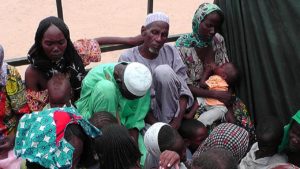 Sequel to the ongoing operations to clear Boko Haram Terrorists in its area of operations, the troops of 21 Brigade in conjunction with elements of 151 Task Force Battalion of 7 Division, Nigerian Army have conducted offensive operations along Aulari in Bama axis. The troops successfully cleared terrorists’ camp in Fadan, Shuwarin, Wulari, Ngoro Dauye, Jidori, Alikashiri, Kalzamari-Shuwa and Kalzamari-Kanuri amongst others.

During the offensive operations, 178 people held captives by the terrorists were rescued they include 101 children, 67 women and 10 men respectively. Also, three (3) Boko Haram flags were recovered while five (5) motor cycles were burnt by the troops. In addition, one (1) Boko Haram Terrorists Commander was captured alive and is presently undergoing investigation.

The troops morale remains high as they are determined to consolidate on the success achieved so far under Operation LAFIYA DOLE.
You are please requested to disseminate the news to the general public. Thank you.