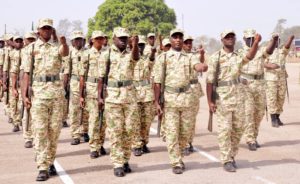 In its efforts to prevent young Nigerians from being      lured into terrorism, prostitution, slavery and other  untoward activities abroad by unscrupulous  individuals, the Nigeria Immigration Service (NIS) has  continued to be stringent in scrutinising those  intending to travel out of the country.
PRNigeria gathered that in the fifteen months period running from January 2014 to March 2015, the Service debarred a total of 23,472 individuals from travelling out of the country from the various departure points.
This is in addition to the 758 others who were refused admission into their intending countries of arrival.
There have been reports in recent times of some Nigerians departing to join terrorist groups especially in the Middle East and North Africa including children of serving and retired top functionaries.
Again, two cousins from Kano were caught at the weekend trying to illegally cross into Pakistan from India where they were students of a Delhi university in their bid to join the Islamic State group.
Imran Kabeer 24 and Sani Jamiliu 25, were arrested on Friday 7 as they made their way allegedly to join the Islamic State (ISIS) in Iraq as they made to scale a barbed wire fence.
When contacted on the development, Spokesperson for the Nigeria Immigration Service, Chukwuemaka Obuah said “what the NIS is doing is to bar young Nigerians with doubtful intentions from leaving our shores.
“Before the advent of ISIS the NIS have been battling with illegal migration, organised or otherwise. The push and pull factors have always been there and the NIS has fashioned a robust profiling mechanism that identifies those whose intent for going abroad is either inimical to themselves or the image of the country. The government exercise of diplomatic protection is exercised not only abroad but at ports of entry.”
He reiterated that “Nigeria is a catchment area for recruiters because of the high number of jobless people in the country. The terrorist group has a syndicate that arrange travel documents, visas, ticket and money for their recruits.
“To counter this, the NIS now engages in intense profiling of travellers. We have always had problems of Nigerians going abroad for greener pasture. We look at the age of the intending traveller and the person he is travelling with, put them by the side and profile them thoroughly,” he declared.
PRNigeria
PRNigeria encourages institutions to be transparent in their information management as it provides news items from authoritative sources for free use by the media