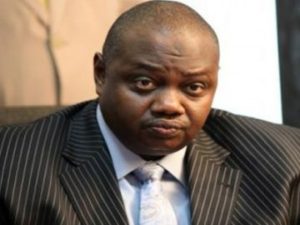 Chairman of the Economic and Financial Crimes  Commission, EFCC, Ibrahim Lamorde, has thrown a  strong challenge to Civil Society Organizations, CSOs,  in the country to look inwards and fully support the  anti-graft agency in its concerted efforts aimed at  ridding the country of economic and financial crimes.  The comments of the agency’s boss, which were made  at a Share Fair workshop, tagged “Fulfilling its  mandate: Government Leading Anti-Corruption Efforts”, organized by the CLEEN Foundation, held on August 11, 2015 at the auditorium of the Bolton White Hotel, in Abuja, comes on the heels of an orchestrated “protest” staged at the premises of the EFCC Abuja office, recently, which was carried out by a rented crowd claiming to be representatives of CSOs in the country, under the aegis of Coalition of Civil Liberties and Equity. Represented by the agency’s Director of Operations, Olaolu Adegbite, he noted that it was essential for the society at large, including the CSOs, to see themselves as partners with the EFCC, in the war on corruption. “We believe in engaging with the civil society groups, as well as non-governmental organizations, but the events in question, where a group of protesters caused a melodrama at the premises of the agency, accusing the agency of prosecuting corrupt individuals in the country, was most shocking,” he said. He added that: “It has therefore got to a point, where we now have to sieve those who are partners in progress, from those who though parade themselves as civil society organizations, are actually tools in the hands of some corrupt individuals in the country that we are investigating and prosecuting.” Lamorde noted that the commission receives tones of petitions every year, “but we go through every one of them, and those that are based on frivolous accusations, we throw away, but those which after investigation, we come up with facts, we pursue them.” The Share Fair workshop, which was organized in partnership with the Campaign for Good Governance, Partners for Democratic Change, Institute for War and Peace Reporting, and Budgit, provided yet another platform to further highlight the ills of corruption on the ordinary citizen, as well as fashion out ways of ensuring victory over the scourge. Abdul Rahman Mansaray, a senior prosecutor with Sierra Leone’s Anti-Corruption Commission, shed light on efforts the commission had made in curbing corruption in the country. Describing corruption as a monster that deprives people of better life, he said, “It is essential to have the political will to fight corruption, as this is the starting point, and luckily for us in Sierra Leone, there is that will to prosecute the corruption war.” He further noted that President Ernest Bai Koroma gave the commission the much needed independence, because, “we prosecute cases without having to wait to receive a go-ahead from the Attorney General of the Federation.” Adedayo Kayode, head of the Investigative unit of the Independent Corrupt Practices and Other Related Offences Commission, ICPC, who represented the commission’s boss, Ekpo Nta, noted that prevention was very essential in the corruption war. “Prevention is essential, but it must be balanced with prosecution,” he said. Joe Abah, director general, Bureau of Public Service Reforms, stressed the importance of the Freedom of Information Act, urging Nigerians to utilize it as part of their contributions in checking corruption in the society. “The most important tool in the corruption war is perhaps the Freedom of Information Act, and in my view, it is the most powerful with the exception of the Nigerian Constitution, which all Nigerians must take advantage of,” he said.
Wilson UwujarenHead, Media & Publicity11th August, 2015
PRNigeria encourages institutions to be transparent in their information management as it provides news items from authoritative sources for free use by the media