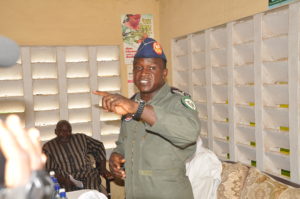 The Nigerian Air Force (NAF), in an effort to elicit  more supports from the civil populace and create more  security awareness, recently launched a ‘See Something  Say Something’ initiative in Yola, Adamawa State.
The initiative was launched at a security sensitization  lecture organized for residents of Yola, Adamawa State.  The objective is to get the civil populace to share  information with security agencies or report the activities of suspected persons or members of the Boko Haram Terrorist (BHT) group.
The initiative recognizes the collective role and responsibility of the people, military and civil alike, to fighting terrorism. It is thus a new approach by the NAF to enhance the effectiveness of the on-going counter insurgency operation in the North-Eastern part of the country.
Identifying terrorist activities as senseless and inhuman, the lecture pointed out that it could only bring pain, regrets, poverty and underdevelopment to the people and their community. As such, the participants were urged to be actively involved in the on-going counter-terrorism campaign, and to help spread the message by educating their wards with a view to bringing all hands on deck to defeat the terrorists.
The new initiative raises the need for the civil populace to be more security conscious and to report observed suspicious behaviours to security forces. The initiative calls for increased human intelligence by employing the individuals to know their neighbours, and to question strangers in the communities. As part of security tips, it enjoins persons having uncompleted buildings in remote locations to regularly inspect such buildings, and to be wary of unidentified luggage, abandoned vehicles and unplanned gatherings in public places.
Air Commodore Dele AlongeDirector Public Relations and InformationNigerian Airforce
PRNigeria encourages institutions to be transparent in their information management as it provides news items from authoritative sources for free use by the media