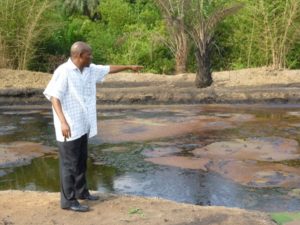 In a bid to check the incessant oil spill pollutions that  have left dozens dead in Ogoni land, the Federal  Government has called for collaboration from the  Ogoni Youths in the clean- up exercise.
The Permanent Secretary of the Ministry of  Environment, Nana Fatima Mede (Mrs.) gave this c  charge recently, when a three man delegation from  Ogoni Youths Assembly, Abuja led by Piegbe  Emmanuel Uebari paid her a courtesy call in her office.
Speaking the permanent secretary said that President Muhammadu Buhari’s administration is not unaware of the quantum devastating environmental degradation in the Niger Delta region and the President shares in the pains and agonies of Ogoni people especially as the government has often maintained that this administration is for the people.
She stated that the presidential directive to fast track the UNEP report on the Ogoni land will be carried out without delays and will not suffer unnecessary bottlenecks in making sure that the report is implemented.
“The UNEP report on Ogoni land is very comprehensive and government is poised to ensure that due diligence is enshrined in the execution of the entire report, not only in Niger delta but all other regions of the country being experiencing oil spill”
She further enjoins the Ogoni Youth Assemble to sensitize their people in supporting the consented efforts of the present administration, more especially the implementation of UNEP report on Ogoniland in bringing succor to the people over the environmental degradation of past years.
Earlier in his speech, the leader of the delegation, Piegbe Emmanuel Uebari commended the effort of the Permanent Secretary of Environment in facilitating the process that led to the presidential approval of the fast tracking of the UNEP report on Ogoni land.
The leader of the delegation who painted a sorry picture of the effects of pollution on the people of Ogoniland stated that the clean up exercise will restore hope and reduce mortality rate being recorded in Ogoni land on a daily basis.
He appeals to the Federal Government to include the youths of Ogoni people in the new governance framework of the Hydrocarbon Pollution Restoration project (HYPREP) especially in the project management.