Chairman of the Economic and Financial Crimes  Commission, EFCC, Ibrahim Lamorde, has advocated  improved financial intelligence gathering by the anti-  graft agency and other law enforcement agencies in the  country to check flow of illicit funds, if the war on  terror must be won.
“A reputable strategy to fight insurgency is to deprive the insurgents of funds, because there is no dispute that illicit funds movement across borders fuels organized crimes, including terror attacks and insurgency in Nigeria,” Lamorde said.
According to him, “There is an urgent need to strengthen our financial intelligence architecture to enable us effectively monitor cash trails and check illicit cash flow to organized criminal gangs.”
Lamorde, who spoke at the opening ceremony of a five-day inter-agency training programme on, Cross Border Financial Investigation organized by the United States Department of Homeland Security, for  officers of the Nigeria Police Force, NPF; Nigeria Immigration Service, NIS; Nigeria Customs Service, NCS; National Drug Law Enforcement Agency, NDLEA, and the EFCC, stressed that it was of great concern that “up till now, the major concern in the fight against insurgency is on how the insurgents fund their operations within the sub-region.”
“While tremendous progress has been recorded in strengthening the Anti-Money Laundering Regulations and the Compliance Regime in Nigeria, monitoring the movement of cash outside the financial sector, remains a major challenge, because of Nigeria’s predominantly cash-based economy,” he said.
The EFCC boss Chairman, also applauded the commitment of the United States government in assisting Nigeria surmount its contemporary challenges through institutional development. His words, “it is gratifying that this programme is coming a few weeks after the historic visit of President Muhammadu Buhari, to the United State, where he and President Barack Obama pledged to deepen the cooperation and friendship between our two countries”. Lamorde who said he had always considered the United States as a dependable ally in the fight against economic crimes and corruption in Nigeria, explained that the record of partnership between the EFCC and major US institutions, such as the Department of Justice, Federal Bureau of Investigation, FBI, United States Postal Inspection Service, United States Secret Service, among others, bears testimony to this. He said the EFCC has benefitted from several training programmes organized by US agencies in Nigeria, Ghana, Malta, Botswana and the United States. He however described the impact of such exposure on the operations of the Commission as invaluable. Lamorde who said the focus of the training programme, Cross Border Financial Investigation, is most timely considering the challenges that that confront Nigeria and her neighbors in the areas of money laundering and terrorist financing said, it has become imperative to strengthen our financial intelligence architecture to be able to monitor cash trails and check illicit cash flow to organized criminal gangs. He said while tremendous progress has been recorded in strengthening the anti money laundering regulation and compliance regime in Nigeria, monitoring the movement of cash outside the financial sector, remains a major challenge, considering that Nigeria is still predominantly a cash-based economy. His solace is however in the fact that the EFCC, in collaboration with the Nigeria Customs Service and the National Drug Law Enforcement Agency, NDLEA, have in the last few years taken very bold steps to check illicit movement of cash across our borders; where operatives stationed at major international airports across the country have intercepted millions of dollars in cash, which were not declared to customs by their owners. This measure, he recalls, said accounted for the significant drop in currency outflow outside Nigeria in 2013, as currency declaration dropped from Nine Billion, Nine  Hundred and Twenty Six Million, Seven Hundred and Thirty Nine Thousand, Six Hundred and Forty Eight Dollars ($9,926,739,648.00) to One Billion, Three Hundred and Twenty Four Million, Forty Five Thousand, Six Hundred and Seventeen Dollars ($1,324,045,617.00). There was a further drop in 2014 as currency outflows recorded an all- time low of $807,585,061.70. Deputy Chief of Mission, United State Embassy, Maria Brewer said that the training programme will expose participants to new trends and techniques in combating economic and financial crimes. “Since economic and financial crimes is a global phenomenon, the training will focus among others, on taking away proceed of crime, because when you take away the money, you take away why people do crime”, she said. Other dignitaries at the opening ceremony included, Benjamin Bryan, acting director, International Narcotics and Law Enforcement US Mission Abuja; Steve Robinson, Attaché, Department of Homeland Security Investigation, DHSI; T. A. Hundeyin, Deputy Comptroller General of Immigration, who represented the NIS boss, and Alhaji Hamisa Lawal, Commander of Narcotics, who represented the NDLEA boss.
Highpoint of the ceremony was the donation of a high-tech counting machine to the EFCC. Brewer, who made the presentation on behalf of the US government, said that it was one way, in which the President Barack Obama-led administration, planned to assist the EFCC and the country at large in fighting corruption. 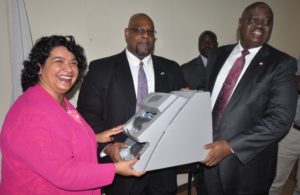 Wilson Uwujaren
Head, Media & Publicity 17th August, 2015
PRNigeria encourages institutions to be  transparent in their information management as it provides news items from authoritative sources for free use by the media