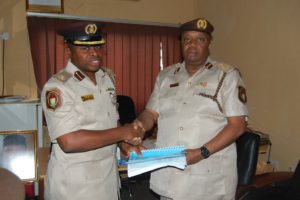 The new management of the Nigeria Immigration Service (NIS) has announced a change of guard in its Public Relations Unit.
2. In a Staff Posting Order vide NIS/ABJ/1027/VV/T111/562 dated 2nd September, 2015, the incumbent spokesperson of the NIS, Assistant Comptroller CPP Obua has been moved to Lagos Command while Deputy Comptroller, Ekpedeme King has been deployed to replace him as the Service Public Relations Officer.
3. Until his deployment, DCI King was the second-in-command at the Murtala Mohammed International Airport, (MMIA) Ikeja.
4. During his tenure as the Service Public Relations Officer, ACI Chukwuemeka Patrick Obua made some giant strides including the upgrading of the Service’s Newsletter to a full-fledged magazine with legal personality as well as the hosting of the 2014 Comptroller-General’s Conference and Stakeholders Interactive Forum in Commemoration of the 50th Anniversary of the NIS.
5. The Service wishes him well and fondly welcomes DCI Ekpedeme King in his new deployment as the Service Public Relations Officer.
Signed
AO OKPU
Superintendent of ImmigrationPublic Relations UnitFOR: Comptroller-General of Immigration
PRNigeria encourages institutions to be transparent in their information management as it provides news items from authoritative sources for free use by the media