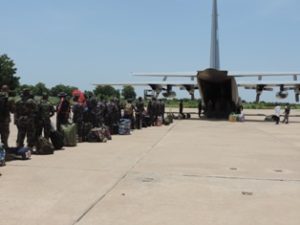 1. The Nigerian Air Force has rotated members of its ground forces fighting alongside the troops of the Nigerian Army who have spent over 6 months at OPERATION LAFIYA DOLE in the North East Nigeria. The latest troop rotation, in line with the usual practice, was aimed at reinvigorating the minds of the personnel, and their commitment to the ongoing fight against the Boko Haram Terrorists, by replacing the weary hands with fresh ones. The rotation also has the corollary effect of morale boasting for the troops.
Meanwhile, the subsisting troops have been airlifted with the NAF C-130H aircraft from the theatre of operation to their various units.
During the short but colourful ceremony, the Commander of 79 Composite Group Maiduguri, Air Commodore Chris Egwoba on behalf of the Chief of Air Staff, Air Marshal Sadique Abubakar commended the efforts of the gallant airmen and wish them success in their future endeavours.
You are please requested to publish/air this information in your mass medium for the awareness of the general public. Thank you for your usual support and cooperation.
Air Commodore Dele Alonge
Director of Public Relations & Information
PRNigeria encourages institutions to be transparent in their information management as it provides news items from authoritative sources for free use by the media